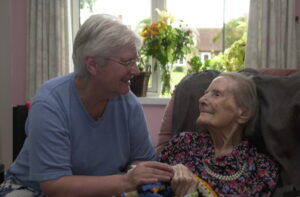 That certainly wasn’t true of residents in our care homes and in many others around the country.  Carers were acknowledged as key workers, and about time too.  In lock-down, when relatives were barred from visiting they went out of their way to help residents keep in touch.  At first they brought in their own iPads and laptops to make connections with families and friends.  They sang with residents, did extra activities together, in fact did everything to keep up their spirits.

But Miss Allsopp is talking about families caring for their elderly parents, and making the point that when ‘both halves’ of a couple of are working it ‘leaves less time both for the old and for the young’.  She was responding to a tweet by a paediatrician about the ambulance crisis being caused by the social care backlog.  And so it is; the NHS is under huge stress because many beds are taken by older people who could go home if there was someone there to look after them.   She said that ‘If we both want to work, then someone has to be paid, and paid well, to care for our parents. We can’t both inherit money, and leave the care of our parents to the state.’

Is she right?  A son once told me that he thought it very unfair that his mother had to pay for her care and sell her house to do it, when someone else, who didn’t have a house to sell was funded by the local authority.  In this financial crisis local authorities are so strapped for cash that it’s very difficult to obtain funding at all, and nearly 80% of residents are now self funders.

Most people want to leave an inheritance for their children, and mostly it’s from the sale of their home.  Probably most people would prefer to look after their elderly parents themselves, but it can be more demanding and more complicated than it seems, especially when there is dementia.  Also, I remember the resident in one of our homes who told me she had chosen to come into care to avoid being lonely in her old age.  She had been one of the big family and had had a big family herself. On that basis she would not have qualified for local authority funding, but perhaps had sufficient funds without having to sell her house.  Either way, by paying for her care the inheritance for her children was being diminished.

My daughter, a natural nurturer, says she can’t wait for me to be old and frail so that she can look after me.  (I think she just wants to be boss!)  Will that mean that when my house is sold she will be entitled to a larger share than her siblings?  On the other hand if the current system persists I’m glad that if I needed residential or nursing care, I could sell my house to pay for it.

When not caring kills