It’s a sad fact, but it’s true.  Most of us  have a cognitive bias towards bad news, which is why it features more than good news in the media – bad news sells.  Some anthropologists believe it’s a hangover from the days when we had to be particularly sensitive to bad news as a form of survival:  for example, you’d need to be able to spot an large animal charging towards you with its mouth open.

These days we read so much bad news about residential care, but nothing about the good care homes, the sort where carers go many extra miles for their residents.  You don’t read about those who give up their own time to take a frail old man to watch his favourite football team, or catch two buses to visit a resident who’s had to go into hospital.

Even when there is good news it can be hidden beneath the bad. An example is an article in the Glasgow Evening Times (4.10.19) about a senior care worker who was struck off for psychological abuse of an elderly resident. (A horrendous story.)  Widening the issue to nurses in hospitals, [Nurse] Professor June Andrews said that staff were often poorly trained and under resourced, adding that ‘as a whole in society we just don’t respect older people. It’s ageism.’  Of course, she’s right.  It’s 5o years since the term ‘ageism’ was introduced by Dr Rob Butler, clinical psychologist and social activist.  He was commenting on the ‘cult of adulthood’ that baby boomers produced in the 1960s and 1970s, where working adults were the epitome of society and once you became old (say, 60 in those days) and retired, you stepped out of the spotlight and feel over a cliff into oblivion.  For nearly 60 years ageism had been reinforced so subtly and powerfully that we have all absorbed it unawares, to a greater or lesser degree.  Just think – when did you last have ‘a senior moment’?  Or ‘well, what do you expect at my age?’ Why a ‘senior moment’?  Did you have perfect recall when you were 40, or 30?  It’s just that if it happens when you are over 60 it is put down to your age.  And if age is responsible for your dodgy knee, why don’t all older people have dodgy knees? 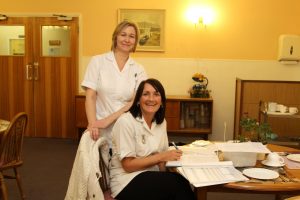 The good news in the Glasgow newspaper is that all students at Glasgow Caledonian University are receiving dementia training from the first module.  Senior nursing lecturer Val Howatson said, ‘I remember when I was training there was a stigma in working in the care of older people but that is not the case anymore.’  As the majority of care homes give excellent care, so do some hospitals.   Dr Jennifer Bute, a former GP now living with dementia, says that when she went into a hospital with a physical condition some years ago, the nurses were ‘wonderful!’  We hear dozens of glowing reports at our conferences and national events, including, of course, from residents in our own Pilgrim Homes and their relatives. One husband, whose beloved wife was living with dementia in our Wantage home said that he had peace of mind knowing that she was being looked after in a loving, caring environment for the rest of her days.  (See the video on https://www.youtube.com/watch?v=I1_K2D6oC08).  On the same video is a carer describing the satisfaction her job gives her.

But bad news and ageism has a knock-on effect, especially when it comes to recruiting new staff.  There are said to be around 120,000 job vacancies in England and Wales.  Our colleagues tell us that working in our housing and homes is rewarding and fulfilling, even it can be demanding.  Pilgrims’ Friend Society was among the first to  receive an ‘Investor in People’ award and staff receive a lot of first class training and support.

So if you know people who are thinking of looking for a fulfilling, satisfying job where you go home each day knowing that you’ve made a huge difference to another human being, do let them know about our work.  And direct them to our website – https://www.pilgrimsfriend.org.uk/jobs .

When a community sings

He is Risen! And pauses to comfort Mary