Everything you need to know about the war on Ukraine is there in words and pictures on today’s Economist’s website.  It opens with a picture of armed Russian soldiers crawling across an empty bridge in broad daylight.  Yesterday, on another platform, there was a picture of a Russian tank firing a missile into a civilian block of flats.  It makes me ask what kind of men can fire death into ordinary families living their every day lives?

This picture is of David Bute and his family.  They live away from the centre, in a quieter part of Ukraine – a part that God has transformed, through his work, into a little town with thriving businesses, schools and – most importantly – Church.  David is emailing daily updates, and this one is particularly descriptive:

“My father was born in London at the beginning of the 2nd world war, and I remember hearing stories of how he was evacuated as a child away from the capital to escape the bombing campaign. I never expected that Ukraine, in the 21st century would be experiencing something similar.

‘Kyiv and other cities are being attacked constantly, but now we personally face that threat. Yesterday evening, we heard the warning sirens in our city for the first time. Initial disbelief was followed by a rush to collect our ‘to-go’ bags and important (for some) questions like, ‘Should we take the cat?’ 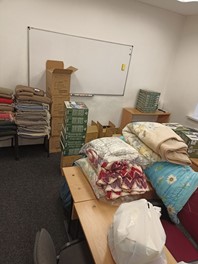 ‘Two years ago, with the help of many people around the world, we built an amazing school called Start Academy. Ironically, little did we know that we were actually building a bomb shelter. In our city, the designated bomb shelters were full – some turning people away – some only letting women and children in. About 40 from our team gathered at Start Academy and distributed blankets and mattresses in preparation for the night ahead. We will provide shelter for anyone who needs it.

‘But prayers were answered for us, and by 10pm we received the all clear, and were able to return home as the night curfew began – because martial law is in place across Ukraine. Other cities in Ukraine are not so blessed as us, and the bombing continued through the night.

‘Thank you to everyone who stepped up yesterday with financial donations – we really appreciate it. We are already using funds that you sent from my personal Ukrainian account to help those in need. We were able to purchase a considerable number of mattresses, blankets and food yesterday.
Updated  information for donations is available below – two options for now –

Husband, 79, passes driving test to be able to take wife to hospital

Have you experienced discrimination because of your Christian beliefs?