Did you see ITV West’s news clip of Dr Jennifer Bute?  When I saw it I thought, not for the first time, how easy it would be to assume that she doesn’t really have dementia.

(You can see the clip here: https://www.facebook.com/ITVWestcountry/videos/376862836336052/UzpfSTExMTU0OTkwODg2ODQ2NToyNDI0OTg0OTE0MTkxNjA4/ )

What you see is an intelligent, articulate woman describing how she has risen to the challenge of coping with dementia in a uniquely positive way.  The clip shows how she is helping others with the Memory Groups she runs in the retirement village where she now lives.  She calls them ‘JMGs’, short for Japanese Memory Groups, based on the work of a Japanese neuroscientist whose work takes advantage of the brain’s ability to make new neuronal connections with the right ‘programming.’ Jennifer has adapted his principles.

What you don’t see is the effort it takes to do it, and Jennifer’s steely discipline.  It’s been part of her character from a very young age and is a strength to her now.  In our book, ‘Dementia from the Inside: a doctor’s personal journey of hope’, there’s a chapter where she describes the steps she takes each day to stay independent.  Laying her clothes out very precisely at night, for example, to ensure she puts them on in the right order and the right way out, in the morning.  Her calendar is kept meticulously up to date.  She will leave reminder notes in places where she knows she will come across them.  Everything that you or I would do without thinking has to be planned and noted in advance.   She copes with hallucinations that would have most of us hiding under the bed.

Most biographies, ghost-written or not, are all about the author, and how dementia is affecting him or her.  Readers want to know how it feels to live with dementia.  But they also want to know more – how to communicate effectively, especially in the later stages? What explains disturbing behaviour – and what’s the best intervention?  Most of all – where is God in all this?  Jennifer gives the answers to these, and so much more.  In the dementia inclusive village where she lives, she visits the lonely and those with dementia, building bridges to bring them to faith or to reignite the love that has faded.

She tells of the releasing effect of laughter and singing, and how a lady who was stuck like a gramophone record on the sentence, ‘the peas are green on Saturday,’ was able to hold a conversation after listening to a Scripture song.  And how, after they’d been laughing together, another person with advanced dementia who normally says very little, suddenly started telling stories about her childhood that Jennifer hadn’t heard before. 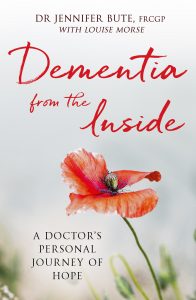 Jennifer’s book gives wisdom from inside dementia. As Jeremy Hughes, CEO of the Alzheimer’s Society wrote, ‘We should all read and learn from Jennifer and turn that learning into action.’

email
Tags: Dementia from the inside

Families bearing the burden of cost for dementia care

The mystery in you

Conferences on issues of old age and dementia