They crossed 5 counties cycling 357 miles in four days, spending most of the daylight hours in the saddle and finishing the last lap at our Brighton home in Sussex late on Wednesday.   They were met with delighted smiles and cups of tea and cake.

The challenges this time were not as severe as their previous marathon in the North. They had only a few punctures; no major mechanical failure, only one day of bad weather (the rain on Tuesday), and weren’t chased by angry dogs!  The only dogs they remember seeing were the half dozen who were taking refuge from the heat in the cool of the village pond they cycled past on the hottest day.  God answers prayer!

‘A particular blessing was the warm welcome we received from residents and supporters at the homes,’ said Stephen, ‘They were so pleased to see us! And it was a delight to take a ‘greeting’, in the form of the first line from a well known hymn,  from one home to the other.’  Milward House in Tunbridge Wells welcomed them with a huge banner. 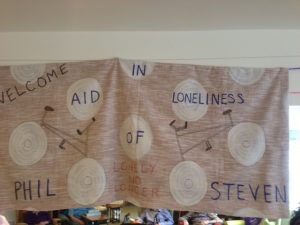 And finally – all the way home!  The heroes are surrounded by friends and family in the snap below.

When we think of loneliness, especially amongst older people, we think about those who can’t get out because of immobility, or lack of transport.  But sometimes it’s because people are held back by negative thinking or a lack of social skills.  Persistent loneliness can produce much negative thinking, making us sensitive to rejection, or criticism, or  to developing low self-esteem.  The reason loneliness is deadly (some research has shown it can lead to early death and increase the risk of dementia) is because it is the exact opposite to what God intended for humanity.  God designed human beings to develop in relationship with one another, in families and in communities.  There are studies of places where healthy old age is commonplace, not because of diet or exercise, but simply because of living in community.

Churches are communities in miniature, and are well equipped to tackle loneliness, both in their district and in the fellowship.  A survey we did of churches in some Welsh valleys showed that top of their list for the seminars and workshops my colleagues and I take was ‘Tackling Loneliness’.  (Second came dementia.)  We look at tackling loneliness from several practical and spiritual angles, speaking from our rich experience of older people.  We also describe ways of empowering and enabling older people to help.  We listen to people who are tackling loneliness in their churches with a whole gamut of tactics.    In a couple of weeks time, when we’re at New Wine in Shepton Mallet we’ll be listening, learning and sharing, developing even more depth.

It’s an important part of our ministry – but it’s not without cost –  and you can help!  https://mydonate.bt.com/fundrai…/stephenandphiliphammersley1

A final thought – it’s known that spending time with a group of other people is the best way to tackle loneliness, and help rekindle social skills, and groups that meet for a purpose, not just a social event, are best.  Our Brain & Soul Boosting for Seniors fits the bill so well it’s being taken up more and more churches, from others’ recommendation. We’ll have some discounted copies available at New Wine – if you plan to be there, do come and see us!

A petition based on ageism, not the reality.

Probably the best thing you could do this Dementia Action Week