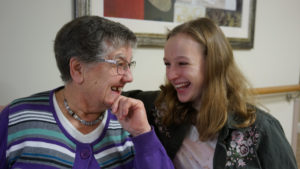 Having someone you can confide in can keep your cognition (your mental processing) young, and also builds your brain volume, researchers at New York University found.   Their study found that this kind of relationship kept cognition four years younger than those who didn’t have one.   Researchers  analysed the social lives of 2000 people with an average age of 63.  They looked at how often individuals had been given good advice, and the love and emotional support they received from people they are close to.

All participants had MRI brain scans to measure brain volume as well as psychological assessments.  Those in their 40s and 50s with friends they could turn to had a cognitive age four years younger than those who didn’t.

Those four years can be incredibly precious, said lead researcher Professor Joel Salinas.  ‘Too often we think about how to protect our brain health when we’re much older, after we’ve already lost a lot of time decades before to build and sustain brain-healthy habits.’

Cognitive resilience is seen as a buffer to the effects of brain ageing and disease, and we need friends in our lives at all ages.  ‘But today, right now,’ he said, ‘you can ask yourself if you truly have someone available to listen to you in a supportive way and ask your loved ones the same. Taking that simple action sets the process in motion for you to ultimately have better odds of long-term brain health and the best quality of life.’

The findings echo those of dementia trailblazer, Professor Tom Kitwood, who said that ‘All events in human interaction – great and small – have their counterpart at a neurological level.’   ‘The standard paradigm takes no account of the way in which brain function is translated into brain structure; it ignores those aspects of nerve architecture that are developmental, and thus closely related to a person’s experiences and defences.’ (Dementia Reconsidered, 2011).

Rising to the technology challenge

An extra benefit is using technology to keep in touch.  Researchers at the University of West London’s Geller Institute of Ageing and Memory, and at the University of Manchester, examined the regular communication habits of 11,418 men and women aged between 50 and 90 years old over a 15-year period.  They found that those who frequently use online communication as well as over the phone or in person showed less of a decline in episodic memory – the ability to recollect meaningful events. Impairment of this is a sign of dementia.  The study found that those who didn’t had a steeper memory decline.Many grandparents read bedtime stories to grandchildren over Zoom and held book clubs on Microsoft Teams.

Professor Snorri Rafnsson, associate professor of ageing and dementia care at the Geller Institute said that it showed, for the first time, the impact of diverse, frequent, and meaningful [social] interactions on long-term memory, and ‘specifically, how supplementing more traditional methods with online social activity may achieve that for older adults.’ 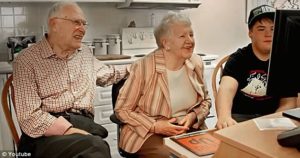 As well as the social interactions and support, learning to use online social technology was direct cognitive simulation and helped memory function, which benefits our brains. And in a nod to older TikTok and Instagram users, he said that the more diverse the technology they embraced, the more protective the experience became. ‘The more platforms they can master, the better,’ he said.

The takeaway from these studies is that treasuring our friends and using technology at times to be together is incredibly good for us.  So good, that it can strengthen our brains and put off dementia.

It’s interesting to see how, once again, research echoes biblical precepts.  ‘And let us not neglect our meeting together, as some people do, but encourage one another, especially now that the day of his return is drawing near,’ says Hebrews 10:25. ‘A man of many companions may come to ruin, but there is a friend who sticks closer than a brother,’ Proverbs 18:14.

It reminds us to keep in touch with our friends, and not take them for granted.  And while thanking God for them we need to rise to the challenge of the different technologies.

No hospital for pensioners, only video link

The Criminal Scam That is Stealing People’s Homes