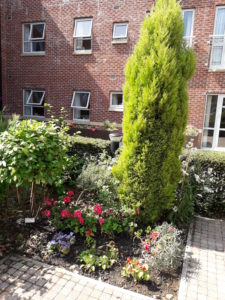 When Royd Court first opened in Yorkshire in 2007 the only splashes of colour in the garden were the lavender and roses, though there were plenty of shrubs.  Over the years  (liasing with the Landscape manager) residents have added flowers and plants that give colour all year round, and some of the shrubs have been cleared to make space for a herb and vegetable patch, with lemongrass, dill, fennel, cumin, and sage.  They come in handy for the chef who regularly uses them in his recipes.

At one time residents were invited by a generous donor to choose a fruit tree that would represent the spiritual fruit mentioned in Psalm 92, “they will still bear fruit in old age”.   It led to the idea of a ‘Bible Garden’, replete with the flowers, plants, herbs and shrubs that are mentioned in the Scriptures. Each plant would have a name tag and Bible reference(s).  It’s a three-year project that will provide a  treasure hunt:  walking out with a Bible, reading the labels on the plants, and reflecting on the passages.  Eventually there will be 51 plants:  so far there are 31 in clusters of Broom, Lily of The Valley, Marjoram, and Myrtle.

This year, for the first time, Royd Court entered the ‘Mirfield in Bloom’ competition, with 11 of the residents as part of the team.  ‘It’s a lovely way of us being involved with the community,’ said manager Vicky Miller.   The idea came from Tim Grace, chairman of Grace Landscapes, Royd Court’s contract gardeners. The green-fingered team regularly waters, ‘deadheads’, prunes, cleans the moss from between the small paving, keeps the planters tidy, and most importantly – sorts out the tea.

Vicky said. ‘We try to encourage all our residents to be involved, where ever possible. Our oldest resident, aged 103, helps to ‘deadhead’ from his wheelchair. Other residents are drawn into the garden to see what’s going on.’ 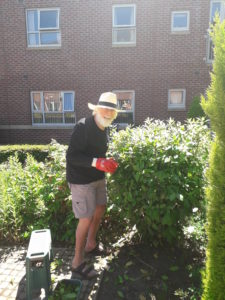 And as if the plants aren’t enough, some ladies knitted flowers to be placed through netting suspended under the canopy at the Co-op in the town.  One lady knitted over 100 flowers!

Most people passing by on the outside of Royd Court will have no idea of the beautiful garden in the centre.  ‘It’s like a secret garden,’ said Vicky, ‘residents can be involved in their passion for gardening and it’s a place for meeting others, and for staff to have lunch and relax during breaks.’

The miracle cure doctors should promote

God’s original plan and the great times ahead