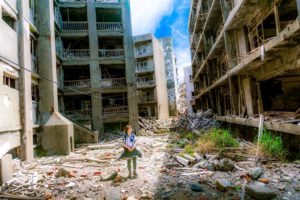 ‘Believing that the end of the world is nigh’ was the first sentence in a notice in a Bible shop window in Frinton in 1940.     It continued,  ‘you are invited to come in and choose a free Bible …’ with an explanation of why that was vital as the world hurtled towards its end. The shop belonged to Ernest Luff, the leader of a small band of travelling evangelists who carried the Gospel all over Britain in the 1920s.  They were known as the ‘Pilgrim Preachers’.  He also founded the care home in Walton-on-the-Naze that we took over some years ago, and redesigned and refurbished.  I’m sure he’d be pleased that it’s now part of the Pilgrims’ Friend Society.

Here we are in 2022, and if Ernest Luff were alive today I’m sure he would rewrite his 1940s banner and stick copies on all the telegraph poles and lampposts in town – and over the internet.

Every day we are deluged with images of burning buildings and homes,  and crowds of people, mainly women and children,  struggling to get to safety.  The Economist puts it well –  ‘Marvel at the heroism and resilience of Ukraine. … In the face of Mr Putin’s invasion, the Ukrainian people have discovered they are ready to die for the idea that they should choose their own destiny. To a cynical dictator that must be incomprehensible. To the rest of humanity it is an inspiration.’  The masthead is a Ukrainian flag dripping with blood.

Is it any surprise that there’s a rise in fear and anxiety?  Especially among older people, who’ve been told for the last two years that they are especially vulnerable – yes a different war with Covid, but the message goes in – and it doesn’t stay in a locked drawer in the mind.  It infects every area of their thinking, including whether or not to go to church.

If that’s you – how to deal with those fearful thoughts?  By taking every one ‘captive to Christ.’ (2 Corinthians 10:5).

Hezekiah lived in turbulent times like ours.  He received a threatening letter from King Sennacherib (2 Kings 19:14) that threatened to wipe him and all his work out. Heziah spread the letter out before the Lord and said,

‘O Lord, God of Israel, you are enthroned between the mighty cherubim! You alone are God of all the kingdoms of the earth. You alone created the heavens and the earth.  Bend down, O Lord, and listen! Open your eyes, O Lord, and see!’

And we can follow the writer of Psalm 131, who wrote,

‘Lord, my heart is not proud, nor my eyes arrogant;
Nor do I involve myself in great matters,
Or in things too difficult for me.
I have certainly soothed and quieted my soul;
Like a weaned child resting against his mother,
My soul within me is like a weaned child. Israel, wait for the Lord
From this time on and forever.’

Who doesn’t need to lean on Jesus, these days?

email
Tags: Fear grows unless unchecked - here's the Scriptural way to do it

Why New Wine works so well!

Getting the facts right about dementia