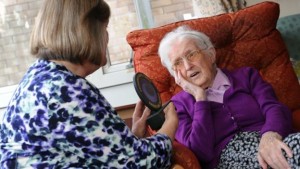 Gwenllian Davies, thought to be the oldest woman in Wales, died today, 25th January, aged 110.  Gwenllian was born in 1905, the year that Albert Einstein published his famous papers on the theory of relatively.  It was also the year of the national colliery disaster at Waltstown in the Rhondda, when an underground explosion killed 120, leaving only one survivor.  She lived at the Awel Tywi care home in Ffairfach, Carmarthenshire. She’s pictured here receiving an award for the home last October. A social worker described her as ‘a wise, well-read and witty person who had led a fulsome and incredible life spanning an amazing century of great changes.’  In her nineties she asked her mobile library to lend her the works of Russian author Dostoevsky.

The oldest woman in the UK is Gladys Hooper, 113 years old.  Gladys made surgical history last year when she was operated on by orthopaedic surgeon Mr Millington (Isle of Wight)  after a fall had damaged her hip.  At the time Mr Millington said not to have operated would have led to an extended period of bed rest with great discomfort and a likely gradual decline in health with poor prospects for survival.’  A couple of weeks ago, on January 15th, she celebrated her birthday.

We could all live to be 120, if the results of a drug trial currently taking place in the States are successful.  The drug, Metformin, has been shown to extend the lives of people with diabetes, even beyond those of people without the disease, and the scientists trialling it reckon it could do the same for all of us.

Some years ago I worked for a life science publisher and remember discussing a paper with a colleague about genetically modified fruit flies whose lives had been extended by three years which is a long time, relatively speaking, for fruit flies. And not only had they lived longer – they lived well, too, still functioning fully until they suddenly dropped dead.  We discussed whether sudden death like that would be a good thing for human beings.  We didn’t ask ourselves whether living longer would be a good idea, because we automatically assumed it would:  it was a given.

But is it, really?  We’ve had quite a few ‘aged’ folk in our homes.  There was 105 year old Kathleen, in Shottermill House in Haslemere.  A lively little lady, she used to nag the manager about other residents not having enough exercise.  But as one year ran into another she would ask, ‘How is the Lord going to take me Home, when there’s nothing wrong with me?’  The only tablet she took was half an aspirin a day.

And there was 107 year old Mrs Elizabeth Goven, in Milward House in Tunbridge Wells.  I remember visiting the home when she was about 105, and seeing her playing chess with a visitor.  She used to ask the manager, ‘When is the Lord going to take me Home?  I feel de trop here.’  (Surplus to requirements.)

There was also 103 year old Ron Lintott.  I often mention him and his wife Babs.  They were married for 81 years, and were about to celebrate another wedding anniversary when she fell out of bed, broke her hip and died.  He told me not to feel too sad for him, because at his age he knew they’d be together again, soon.  And where they would be is wonderful.

And this is the nub of it.  We know that where we are going is infinitely better than where we are.  We are eternal beings in ‘earthly tents’, as the apostle Paul describes it, simply here on pilgrimage.  2 Corinthians 1:22 says that God has put His Holy Spirit in our hearts as a pledge and foretaste of the good things to come.

It would do us good to sit quietly and meditate on Heaven.  There’s no loneliness there, no depression, no stress. There’s the best company in the universe with the host of saints.  There are all your loved ones who have gone before.  Everything your heart really desires is there.  (For all you know, there may be even cups of tea in Heaven!  And I know that a colleague, with a seminary education, is conflicted about the absence of steak.)   But best of all, there is Jesus.  Seeing Him, we will be filled with inexpressible joy.

If the American Metformin trial results mean that we can take a pill each day and live to be 120, is that what we really want to do?

Amazing is possible at 82 and beyond!

Are the elderly the invisible victims of the middle east war?