This is a true story but the writer wants to stay anonymous, because he says that everyone in his church’s Tuesday cafe team deserve praise, not just him.  I heard of him when a correspondent told me about the amazing older man who had transformed the cafe, taking it to a whole new level with his cooking.  (Paul is not really an ‘older man’, he’s in his early sixties!  However, my correspondent is barely thirty, so that says a lot about how we see age!) 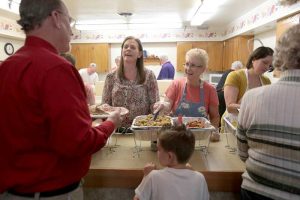 Paul’s story is uplifting, but it also has a clear message to people who are approaching retirement.  Paul says, ‘Being made in the image of God then we too have not been designed for a prolonged period of rest.’  God has a purpose for each one of us at each stage of our lives.  And in true Ephesians 2:10 style, God led Paul to his next ‘good work’.  Here’s his story:

‘So I’ve got cancer. Thanks God. If I survive this then I’m taking early retirement.

Five years later and, at the age of 58, I have a meeting with my manager in twenty minutes with a letter of resignation in my pocket. Absolute panic – I can’t go through with it.

Two years further on and I’m sitting in the garden with a glass of wine. I went through with it – but a large part of me wishes I hadn’t. Gardening used to be fun but now I realise that it was just a distraction from work and is actually rather boring. I longed to read more, but am still unsure as to what I want to read. My daughter tells me that it’s OK to potter around after an illustrious career. So this is how it ends. Might as well have another glass of wine.

I had thought of doing something for the Church but all they wanted was someone to work with the youth (not my forte) or be in a prayer group (more sitting around but without the wine). I pondered briefly whether any of the skills from my chosen career could be transferred for use in the Church – but there doesn’t seem much call for a retired doctor in sexually transmitted diseases.

Wait a minute. They’re asking for volunteers in the Tuesday Café. I didn’t even know the Church had a café. I suppose I could serve tea and cakes. A pleasant distraction, I suppose, from sitting in the garden drinking wine.

Oh dear –  the Tuesday Cafe is not what I expected. Hard working volunteers remembering the good old days when the menu was more varied than pie and veg and loyal regular customers who arrive to support the Café rather than have their taste buds excited. Oh well, I’ve still got the garden and I think I’ve got another bottle of wine somewhere.  Oh no stop it . . .I know that your career was about problem solving but this isn’t your problem . . .Why won’t you go to sleep instead of thinking about the Café . . .What are you doing awake so early: you’re thinking about the Café again aren’t you . . .I know you like cooking but you’ve never cooked for anyone but the family . . .You could severely embarrass yourself here . . .

Three months later and I’m sitting in the garden drinking another cup of coffee. Monday is shopping and prep; Tuesday is prep and cook. Two specials each Tuesday Café which, I have been told, could grace any bistro menu. People tell me that the Church is buzzing about the quality of the food. Personally my response is that I think that there are an awful lot of people in my Church who should get out more as this is only the sort of food that I would cook at home; but I’m a man and I’ll accept any compliment I can get.

Amongst us volunteers in the Café we have a good laugh every Tuesday and there is a growing optimism that we are providing a good quality service which is ministering to the local community; as it was in the old days.

So as I sit here in the garden drinking coffee what have I understood? That God rested on the seventh day after creation and has been working constantly ever since. Being made in the image of God then we too have not been designed for a prolonged period of rest. In retirement I thought that I knew what I wanted but God knew what I needed and through that His name glorified.

But who is that older person looking back at me in the mirror? It can’t be me. I don’t feel like that anymore.

email
Tags: blessing others in retirement, is good for your health

GPs to give terminal diagnoses by Skype