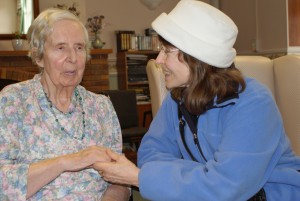 This morning on Radio Four, Rabbi Jonathan Sacks commented on a study showing that just one hour a week of social interaction helps people with dementia.   Rabbi Jonathan Sacks is a philosopher, theologian, author and politician:  it’s as a politician he shone this morning.  Ever mindful to promote all things Jewish, he mentioned the man who invented Cognitive Behavioural Therapy (CBT), Aaron Becks, now aged ninety-six.  CBT is known to be the most effective form of psychotherapy for anxiety and depression, conditions which are common among people with dementia, and visiting Becks recently, Rabbi Sacks asked him if CBT could help people with dementia.  Becks replied that, at first he hadn’t thought so, but evidence is mounting that it does indeed, help. If I had his email I would write to him and say of course it does, because CBT is uncannily aligned with Scriptural principles which, as far as human beings are concerned, are as irrefutable as the law of physics – perhaps more so.

Commenting on the research, Rabbi Sacks said that the Psalms spoke of the importance of people spending time with each other.  In the New Testament Jesus takes it even further, with His second most important commandment to love your neighbour as yourself (Mark 12:31).

The University of Exeter trial involved more than 800 people with dementia in sixty-nine care homes in England. It found that spending more time communicating with residents could boost older people’s well-being, when combined with personal care. ‘As well as improving quality of life, the programme reduced levels of agitation and aggression.’ [i]

Sometimes I wonder if researchers live in their own separate silos. It’s been known for some time that social interaction, which really means people listening and talking with people, has a more profound effect on brain health than computer training programs. One research leader said that the brains of people in conversation light up like Christmas trees.

The leader of the study in question today, Professor Clive Ballard,  reported that the average amount of social interaction for people with dementia in care homes was just two minutes a day. “It’s hardly surprising when that has a knock-on effect on quality of life and agitation. Our approach improves care and saves money.”

Just ‘two minutes a day’?  For the life of me I can’t see how anyone caring for someone with dementia could spend just two minutes a day with them.  One wife told me that helping her husband get up in the morning and get dressed took nearly an hour. In our care homes I’ve seen how helping someone with dementia to eat takes far longer, and our carers chat at the same time.

Saves money?  Recently our care homes adopted an enhanced dementia care approach.  We’ve called it  ‘Hummingbird ’ because carers have frequent little conversations throughout the day.  It’s personalised to each individual, as carers learn about each one’s personal interests, so they can talk about things that are most likely to engage them. It means that residents get far, far more than an hour a week of social interaction!  Carers also learn about their faith background, so they can encourage  appropriately with ‘a word in season’.  All in a calm, family atmosphere.

It’s meant stepping out in faith because of the extra costs involved.  It’s meant additional training and taking on extra staff at a time when recruitment in the care sector is at its most difficult. But the bottom line is worth it.

Till He appeared, and the soul felt its worth …

Top tips for keeping seniors cool in this heatwave