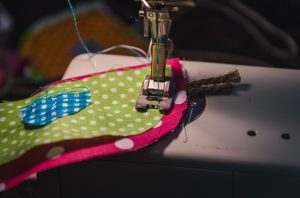 This morning I arrived 30 minutes too early for my optician’s appointment. (Friends, note, I was half an hour EARLY!)  The helpful receptionist said I had time to go to Greggs a few yards away where I could get a coffee and come back with it and read a magazine in the waiting area.  So off to Greggs I went; bought a coffee and a small pizza that looked like Welsh rarebit (but wasn’t) and, instead of going back to the optician’s balancing both and probably dropping one, found a vacant chair at a table next to a lady eating a delicious cream cake.

Turns out she was a chatty 76-year-old, who’d travelled by bus from one of those difficult to pronounce Welsh places ‘up the valleys’ to buy sewing materials from the haberdashers’ in town.  The bus journey took over an hour each way, but she did it at least once a week and looked forward to it.

She’d worked in a sewing shop for most of her life, she said, and loved sewing.  But she’d done far less after she’d retired. She and her husband had been married for 54 years and had had a very full life together, until he died just before last Christmas, after a fairly short illness.  He’d always been strong and healthy, outgoing and companionable, and after his death she’d found herself at a loss, with very little to do and having to adjust to life without him.  She stopped going out.

Then her daughter suggested that she made little aprons for a craft fair they both knew.  She made some pretty ones for girls and they sold very well.  ‘Then my daughter told me there was a complaint,’ she said, ‘not about the quality of the aprons but because they wanted something similar for boys, with workmanlike pockets for them to put things like carpentry tools and toys in.’  So she made some masculine little work aprons, and they sold very well too.

Now she’s expanding her range and saving them up for the big craft fair at Christmas.  She hopes to make a profit and give it to charity.  She looks forward to the bus ride and coming to town and choosing materials and accessories.  This morning she’d found some chunky buttons that worked well on certain boys’ items.  Having a cup of tea and a cream bun at Greggs is a treat to herself and part of her routine.

It wasn’t what you’d call a Christian conversation, but it was a delight to listen to this lady from the valleys.  It was lovely to hear how the talent that God had given her was working for her comfort now, as well as for others’ pleasure.  It gave her a sense of achievement and of being valued.  And it reminded me of Ephesians 2:10, that verse that says that God has equipped us for the ‘good works’ that He has planned for us beforehand.

It’s a Scripture I mention in my talks about God’s purpose for seniors, and how old age is not a mistake, or the result of the Fall, but a specific part of God’s life design.  The Scriptures make it clear that it is a promise, not a calamity, a reward that includes a continuing purpose for every one of us  (Psalm 91:16).  (I’ve described it more fully in ‘What’s Age Got To Do With It.’)  And if God has prepared our ‘good works’ for us, He will bring them to us at the right time.  You could say He’s got it all stitched up!

Have you experienced discrimination because of your Christian beliefs?

Frail elderly thrown out of hospital to die