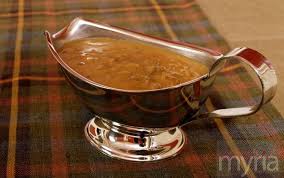 Imagine; every Christmas morning, for years and years, you’ve been up before the rest of the family, making sure everything is as it should be.  This year is the same; everything runs like clockwork till you turn to make the gravy as you’ve done on automatic pilot for years.  Then suddenly, looking at the ingredients you’ve laid out you don’t recognise any of them and you realise you don’t know how to make it.  You’ve no idea what you’re doing, or how you’ve got there.  That’s how it was for a mother interviewed for a story in a Sunday newspaper recently.  For her, the Christmas gravy was a clear warning that there was a major problem in her head.  It led, ultimately, to a diagnosis of Alzheimer’s disease.

For Dr Jennifer Bute it was exploding bananas – which happened years after she had been diagnosed with Alzheimer’s.  In her book, ‘Dementia from the Inside, a Doctor’s Personal Journey of Hope,’ she describes how hearing the bananas explode rescued her from disaster, and highlighted the need for warning systems.  She writes,

‘The Internet delivery man had very kindly put everything in the kitchen for me, including all over the cooker hob. Normally, I just put the items away. But on this occasion, I didn’t.  I just moved enough aside, turned on the hob and put on a saucepan – but turned on the wrong hob.  Then I turned all four hobs on fully, with the plastic bags of shopping still on top.  I could see the red hobs, and I could see the plastic melting, and the cardboard turning into carbon – I could see everything happening but did not realise its significance. And then I could smell it, the burning and the scorching, so I just thought ‘hallucination!’  It was only when the bananas exploded – when the third sense, hearing, came in – that I realised what was happening.  Even though I could see it and smell it, it didn’t mean anything to me.’    She realised that ‘I need to have systems and precautions in place, so that I can continue to live independently.’ 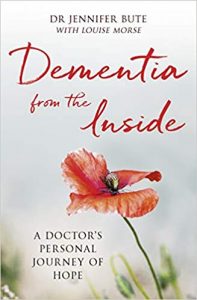 In the book Jennifer describes the systems that she has in place.  She also tells of things that help others living in her dementia friendly village, not just in their daily routines but in ways that help them cope with dementia, with examples in the form of real-life stories.  As leading neurologist Professor Peter Garrard wrote, ‘The observant physician shines through in Dr Bute’s book, while her practical advice reveals the resourcefulness of an inventor.’

It’s this that makes Jennifer’s book unique in the annals of dementia.  It’s not just her personal story, rivetting though that is. It’s inspirational and practical at the same time.    It’s easy to read -‘beautifully written’ said Susan Macaulay, famous author, blogger, dementia care advocate.  It’s the perfect gift this Christmas time for anyone who is coping with dementia.  It’s available from usual outlets, including Amazon, but you can purchase it with free delivery from www.pilgrimsfriend.org.uk