What do you do when you are Chief Executive of a Christian charity facing a £18 million bill for renewing three of its care homes at a time of austerity and falling funds?  The first thing that Stephen Hammersley, Pilgrims’ Friend Society CEO did was to make the needs known to God (Philippians 4:6).  The second was to let everyone else know, so that they could have the satisfaction of helping (Galatians 6:9), and the third was to get on his bike, not once, but three times!

In 2016 Stephen and his son Philip cycled over 450 miles in four days between Pilgrim Homes in the North.  Then in 2017 they cycled a similar distance between the care homes in the South.  They encountered potholes, punctures, a major frame failure and some challenging weather, although Stephen said the warm welcome they received at each home made it worthwhile.  The Pilgrim Home in Leicester even baked a cake with an iced bicycle topping! 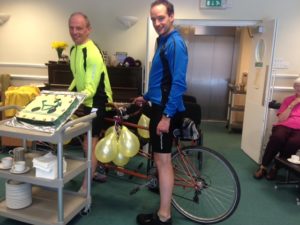 This year Stephen had the backing of his wife, Susan, quite literally, as they rode their 40 year old tandem bike from their home near Luton to the Leonora Home in Chippenham, in Wiltshire.  Susan was the navigator with a satnav at the back, and they mostly cycled over minor roads and tracks.  Some drivers tooted encouragement when they saw the charity sign on Susan’s back.

PFS has recently acquired a site for a new home in Chippenham, and, together with supporters, Stephen and Susan committed the site and plans for the new home and its community links to the Lord.  After leading devotions and having a party with residents at the home they cycled on to their daughter’s home in Pool, and their son-in-law took them, and their tandem, back home.

The cycle ride from Luton took three days, 18 hours and 29 minutes. They cycled an average of 10 mph, though the tandem was frowned on by one speed sign when it reached a top speed of 33 mph. (It went into reverse when challenged by a large farm dog barking furiously on a narrow farm track.)  Every two hours they stopped for a tea break and a physical stretch.  Several people came up and made donations at some of the tea stops, leading Stephen to question whether a good cup of tea enhances generosity.

There was no rain, but the weather grew hotter and hotter, and the last day was the first of the current heat-wave.   Stephen said, ‘we bought the tandem about five years ago as a bit of fun. We’d never ridden it further than around the villages close to our home – this was the first long-distance journey. We thought we might need counselling after four days of such close teamwork with me always at the front and Susan doing the navigating from the rear, but we were relieved that we discovered that we pedal well in tandem!’

To donate , go to https://mydonate.bt.com/fundraisers/tandemhammersley.  Or, if you prefer, you can go to www.pilgrimsfriend.org.uk, and donate through the website, reading more about the charity and its work at the same time.

Tips for a happy, safe Christmas with an elderly relative

Refresh your strength with respite care this summer