The story editor of The Archers, Sean O’Connor, told listeners at the Hay Literary Festival more attention is to be given to ‘the crown jewels’ of the show.  .He was referring to older characters like Peggy and Jill because, ‘they are more than just white haired old ladies … we want to remind the audience that these two have huge import in the plot.’

As well as scriptwriters reintroducing more of a sense of history from its older stars, Mr O’Connor said the show was seeking to regroup, focusing on the farms, homes and agriculture which make up the core thread of the series.

How strange that the writers of The Archers can see the ‘import’ of older people in its narrative, whereas most churches are blind to it in theirs.  Many older people tell us that they feel they are invisible in church.

Wouldn’t it be grand if all our churches in the UK, whose energies are exclusively directed to members in the ‘middle stream’, those between eight and sixty-five, re-examined what made up the core thread of God’s Church – the inclusion of all believers of ALL ages?   If they were to refocus on the cultural balance described in the Scriptures, older members would be able to impart their wisdom and experience to the young and the young – whose glory is their strength, would  be blessed and encouraged to develop and play their part in a balanced whole. 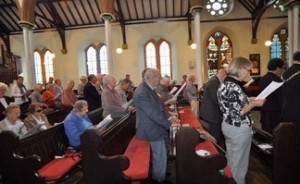 For every church that has a pastoral worker for older people there are hundreds more with only youth workers.  It is so rare for churches to have workers for ‘older people’ that one  asked me, ‘Do you know anyone else who is doing what I do in their church?  If you do, could you put us in touch?’

Yet these older Christians have so much to share.  They have been through the deep waters and fiery trials and have proven God’s promises.  The Bible says they are to ‘tell out’ God’s goodness to them; to share their experiences.  Yet how often are they invited to share their testimony from the front on a Sunday?  And how many of us have seen Leviticus 9:32 in action?  It says,   ‘Stand up in the presence of the aged, show respect for the elderly and revere your God. I am the LORD.’

Old age is part of God’s design for living, and older people have a special purpose.  Where churches have recognised that, they have become strengthened and enriched.  When I spoke on this at a seminar at CRE in London last week participants applauded and said how strengthened they felt by it.  An older man who hadn’t wanted to come to CRE said that God had sent him, and now he knew why. He’d been an active member of his  church but had passively absorbed secular thinking that now he was past it, that he had no purpose.  ‘The day was God ordained,’ he told my colleague.  We are losing so much by not recognising our Crown Jewels.