Did you know that you are worth about £3.5 million to society? And that if every adult in the UK under the age of 75 walked for 30 minutes a day the national debt of £1.7 trillion (and counting) would soon be paid off? Unrelated facts maybe, but with solid common ground. 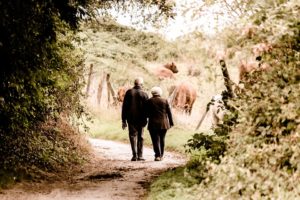 Simon French, chief economist at one of our oldest and most respected Investment Banks, says that ‘Health economists use a metric called “the value of statistical life” to determine the value that society places on avoiding the death of an unidentified individual.  In the UK this is estimated at about £3.5 million. ‘[i]  I may be reading this wrongly, but it’s encouraging to begin the New Year knowing that I’m worth £3.5 million.  (is there some way of cashing in even a small part of this, I wonder?) I’m not good at statistics, so read and re-read the article in The Times to make sure I was understanding it correctly. But the author knows his stuff.

The walking refers to the cost of health and care support for growing numbers of older people. The cost to the Exchequer in health and social care spending is expected to rise from 8% of GDP (gross domestic product) to 14.6% over the next 50 years.  All those 30 minutes walks a day would mean 22,196 fewer deaths per year, which over five years would equate to a societal value of £448 billion through reduced costs of care (both formal and informal) and less time off work because of illness.  That would soon pay off the national debt of £1.7 trillion (and counting).

Not having to service the national debt would mean more money available to benefit all of us. But to the ordinary man (or woman) in the street, these astronomical figures are too theoretical and afar off.  As Professor Northcote Parkinson observed[ii], us smaller minded mortals will spend more time arguing about the cost of a new tea urn for the caff than a new nuclear-powered electricity generator for the city. Perhaps, thinking of the value of each individual, the government could think of a practical investment that would incentivise us, say, £5 for each 30 minute walk?  We could be given Fit-Bits that monitored our walks which, when tapped at the supermarket would give us a discount on the cost of our (healthy) grocery shop?

Now the chief of NHS England, Simon Stevens is urging GPs to take up “social prescribing”, such as joining tango dancing or book clubs, after research found it cut GP visits and trips to Accident and Emergency units by more than a quarter.  Mr Stevens said, “Family doctors tell us the best help they offer some patients is connecting them with local sports, arts and voluntary organisations. For people who are stressed or depressed, who have chronic pain, or with other long term health problems, social prescribing is often worth trying either in place of drugs or alongside other usual care.’[iii]

There’s also increasing evidence that being a volunteer is good for your health.  Some GPs are pointing patients down this path.  One study rated it as the equivalent of a 50 per percent rise in salary!  In an article in our current Pilgrims’ Magazine[iv], one of our volunteers describes what it means to her,  https://www.pilgrimsfriend.org.uk/Handlers/Download.ashx?IDMF=f26b13ef-f51b-48f0-ac31-49310abea7f6

[ii] Parkinson’s Law or The Pursuit of Progress

Is it a ‘forgetory’ or is it dementia?