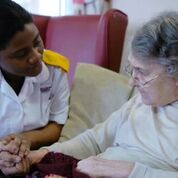 It’s the title of an article in today’s Daily Telegraph.  It includes a lot of personal opinion and, as this is a fund-raiser for the Alzheimer’s Society, some tragic cases.
Phil Harper, a lecturer in health and social care at Northampton University, makes a very good point.  He says that the model of care in which people with dementia can thrive is standard practice in Latin-American countries.  In Latin American countries, ‘people living with dementia are still seen as wise and worth of respect, whereas here in the UK – and in other westernised countries which are more capitalist in their approach and care about the productivity of an individual – we sometimes over focus on the deficit approach, looking at what someone can’t do rather than on what they can.  We tend to focus on the pathology of dementia, at the expense of the person.’
Here in the UK , with or without dementia, older people are not seen as wise and worthy of respect.  Our capitalist view says that once a person becomes ‘non-productive’ and moves from adult to elderly, they are not worth considering.
Professor Harper  would be encouraged if he visited any one of our Pilgrims Friend’s Society (PFS) care homes.  Staff are trained in a ‘Way We Care’ approach that is based on a close relationship with residents with dementia.  There are specially trained ‘hummingbirds’;  carers who spend time with people with dementia, listening, encouraging, keeping them engaged and letting them know they are loved.  All our carers are trained in dementia care, and love and faith is at the centre.
The challenge is that there are not enough of them.  It puts a strain on them that they don’t deserve.  It’s a point of prayer for us when we meet (over Zoom) to pray, each morning and noon time .  It’s a challenge facing the whole of the care sector.  Recruitment is so tough that appeals are going from Care Associations to the Home Secretary to lower the financial bar for people wanting to immigrate here to work in care.  There has always been difficulty recruiting in the UK because care work has never had the same respect as nursing, or teaching.  The perception changed a little during the pandemic when carers were acknowledged as key workers, but it wasn’t deep nor lasting enough.  The human skills that carers bring and the training they do should position them as equal to nurses or teachers, but it doesn’t  –  because ageism underlies attitudes to care work here in the UK .  Older people are not viewed here with the respect that they are in other countries.
It’s different in Japan, says Professor Dawn Brooker, director of the University of Worcester Association for Dementia Studies.  She points out that in Japan, older people are held in high regard, so ‘there’s a big societal push to support them’.
But if she needed residential care, she’d choose a home in a Scandinavian country.  ‘There care homes are comparatively well staffed.  When you’re supporting people with advanced dementia, numbers count.’  ‘In Scandinavia, they pay high taxes and care homes are run by the State’, she adds.   In the UK although taxes are rising from April to fund social care, it’s still far from enough.  And most of the money raised will go initially into the NHS, not to support the care sector.  Not for three years.
She has a point when she asks how much of the money private care providers receive goes into shareholders’ pockets rather than front-line care. There are four big private care providers in the UK, and perhaps there’s an understandable reluctance in government to pay for care for an older person to line ‘shareholders’ pockets’.  But there are also over 2,000 charitable care homes representing about 14% of the care home sector.  Many have been set up by people who want to care for the elderly, and who love what they do.  Interestingly, PFS was founded in 1807 by a group of relatively young Christians who wanted to meet the practical and spiritual needs of older people.
Until there is a  ‘societal push’ for  it, as there is in Japan, we will not see a genuine, properly funded social care plan here in the UK.  The one that was introduced months ago raises taxes, but revenues raised are skewed in favour of the NHS.  Until older people are valued as God values them (see Leviticus 19:32) the work of caring for them will not be seen as special as it is (see Matthew 25:40) and it will be difficult to recruit carers.
A snapshot into ‘The Way We Care’ is on YouTube, at https://www.youtube.com/watch?v=Po6md7pq7nI&ab_channel=PilgrimsFriend
(The best books to read about the relationship approach is ‘Contented Dementia’, by clinical psychologist Oliver James, and ‘Dementia: Frank and Linda’s Story’, by Louise Morse.
Share Us

A Conference You Won’t Want to Miss!

A new test for dementia