… is to thank God for all He did in the old one!  And all the years before that, too.
And did you know that thanking God affects you, too?    Being grateful literally works wonders for our brains, releasing biochemicals that do it a power of good. More and more research is showing that that it actually helps  reshape your brain for the better.   Blood flow is increased and even hemispheres are enlarged.  (I’m all for enlarging parts of my brain, especially the bits to do with mathematics and navigating.)  There’s a whole heap of scientific papers showing how it works:  here’s just one of them – http://cercor.oxfordjournals.org/content/19/2/276.full 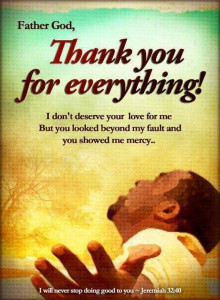 This is not to say that you should scrap around looking for things to be grateful for just because it’s good for you.   But most of us have hundreds of ‘thankful’ moments even though we’re sometimes too stressed to notice them.  So, as a gift to God for the New Year, why not sit down for half an hour and write a list?  He’s interested even in those that you feel are quite mundane  (Luke 12:7).

Top of my list is the special talents He’s given to men.  Yes, ordinary men.  Women are pretty good but men can be rather wonderful.  Like the ones who will pause on a garage forecourt to show you how to open the petrol cap off a hire car, or wrench a stubborn SatNav holder off the windscreen.  And the guy  in Cambridge who tried setting Google maps directions on my phone till he found that it was stuck both on mine and on his, and offered to lend me his SatNav to get back to Wales, saying I could post it back to him.   There was also the lorry driver who paid for my fuel after I’d filled up and found that I’d left my purse at home.  ‘Just send me a cheque,’ he said. Thank you, God, for the kindness of strangers.

It’s important, too, to be kind others.  One of the most maligned groups at the moment are telephone sales people.  You know, the ones who cold call just as you are sitting down to dinner.  There have been some clever and amusing ripostes in the media about how to deal with them, but most of them are just ordinary people doing their best to earn a living.  Why be rude to them?  Be kind.  You might even get the chance to tell them about Jesus.

Research begins next month in the States on a promising new application for an old drug.  Metformin has been used for decades with diabetic patients, and their physicians noticed that many of them lived longer than  their non diabetic peers who weren’t taking it. Now 3,000 healthy older people are to take it to see if it helps them live longer too.  It’s said to work along two pathways – oxidation and inflammation , neither of which is good for us, it seems.

But, according to recent research,  the fear of growing old is affecting brain health.   A group of men and women were studied from the time they were in their late 50s and early 60s, until they died.  Among the data collected at the start of the study was their attitude to ageing. Some were positive about ageing and some were very negative.

Twenty years later they began to have a yearly scan that measured the size of their hippocampus, the brain’s learning centre and memory hub.  The brain normally shrinks a bit with age, but people who’d had negative views of ageing 20 years earlier had hippocampuses three times more shrivelled than the others. There was even more evidence after their brains were autopsied: those with negative views had higher levels of two proteins that are hallmarks of Alzheimer’s.

Researchers at the Yale School of Public Health said that the findings still held when age, education and overall health were also taken into account.  They recommended positive thinking, not surprisingly.  And there has been a whole slew of research in the last year showing that negative emotions affect physical health.

But we should know this already, surely?  It’s been in the Scriptures for generations.  The Complete Jewish Bible says it best:  ‘Above everything else, guard your heart; for it is the source of life’s consequences.’     Proverbs 4.23.

In ‘Dementia; pathways to hope’, there’s a chapter on how to spot your negative thinking and how to replace it with the positive.  There’s information from a famous neurologist who trained herself to do exactly that.  She said that she couldn’t choose what happened to her in life, but she could choose what thoughts could dwell in her mind!  So perhaps a good New Year’s Resolution would be to snag those anxious, angry, unforgiving, judgemental, unkind thoughts and do what Jesus said is the second most important thing – love one another!   Happy New Year!  And  may you have many of them! 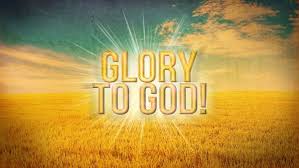 How to prepare for a great old age!

Grandparents – one of the reasons God planned old age.

The storm after the calm