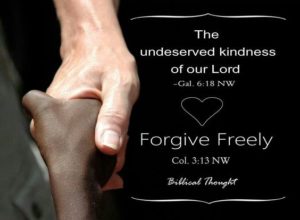 ‘If Jesus himself were to shadow me for a day, he would be forced to regretfully conclude that most of the people I interact with on a daily basis are quite simply beyond forgiveness, including but not limited to the colleagues who don’t quite pull their weight on the tea run,’ writes journalist Tom Ough.* He cites the man in the Tube who waltzed around the queue for the downward escalator and on to the steps, ‘his hateful head’ disappearing down the tunnel. He could forgive anything, but not that.   ‘And not the flatmates who litter the kitchen and avoid domestic chores. And not the friends who don’t repay debts unless asked. And not the woman downstairs who bellows at her children by day and chants Bible verses by night.’

It was the woman and the children and the Bible verses by night that caught my attention. Having children that made her bellow meant the poor woman probably recited Bible verses by day as well – just that it was more audible in the quiet of the night after they’d gone to bed.  But surely this is only an irritation, not a deliberate offence that needs forgiving?

Tom Ough wanted to find out more about forgiveness, and about living with wisdom and restraint and behaving with gratefulness, calmness and humility.  He looked to the teaching of a Krishna monk, who has written a book that outlines what he calls the four steps to peace, purpose and lasting happiness, explaining how we can take care of our inner selves, our relationships, our work life and our contributions to society.

‘After a long conversation and some reading, Tom was able to develop a different attitude to ‘wrong-doers’.  He noted that, ‘when the messiness in the kitchen culminated in my discovery of rotting beansprouts in the fridge, I crafted a very gentle message about it in our house WhatsApp group, prompting an apologetic response, rather than the tit-for-tat escalations that sometimes follow similar complaints.’

Unforgiveness, can affect our physical health more profoundly than we realise, and research points to an increase in the forgiveness-health connection as you age.  Unforgiveness has been described as swallowing poison in the hope that the other person dies. The only person it harms is yourself.  And if we age with unforgiveness it creates a hard, bitter personality, one that steals our peace and injures others’.

On the other hand, studies have found that simply forgiving can reap huge rewards for your health, lowering the risk of heart attack; improving cholesterol levels and sleep; and reducing pain, blood pressure, and levels of anxiety, depression and stress. See advice from the highly regarded John Hopkins Medical Institute in the States. (https://www.hopkinsmedicine.org/health/wellness-and-prevention/forgiveness-your-health-depends-on-it)

Tom Ough thought that that the Krishna monk could guide him and other modern Westerners to a happier and more tranquil existence.  But the answer is in the Bible, and the power to forgive comes from the Holy Spirit.  In her book, ‘The Hiding Place,’ Corrie Ten Boom describes meeting the concentration camp Nazi guard who had been responsible for her sister’s death in the camp. A fairly short time after her release, at a Christian meeting where she had been speaking, not recognising her the former guard held out his hand to shake hers.  She realised at that moment that although she knew it was the right thing to do she did not have the ability within herself to do it.  She lifted her heart to God and felt such a release of His love for her that she was able to give forgiveness, from her heart.  She felt a weight fall away, and she was changed.

The best motivation to forgiveness was given by Jesus. ‘But if you do not forgive others their sins, your Father will not forgive your sins,’ He said.  (Matthew 6:15).

Don’t let yourself be swept up with Covid anxiety

Don’t ever think that you are not ‘useful’!

How ‘Guarding your heart’ (Proverbs 23:4) could help to avoid dementia