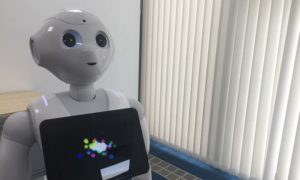 If you were visiting your mother with dementia in her care home, how would you feel if you found her having an animated conversation with a 4-foot-high robot, which was responding empathetically, and creating a warm dialogue that was obviously engaging her?

It may sound like science fiction, but it’s already here.  Last November, Southend Council paid £15,200 for one of the robots, called ‘Pepper,’ to free up time for human carers running a “reminiscence group” to stimulate sufferers.[i]     It’s the first commercially available robot with the ability to recognise a person’s mood and adapt its behaviour accordingly.  He can change his eye colour and voice to match happy and sad emotions. Pepper can speak 12 languages and is also connected to the internet, which means he can keep users up to date with the latest news, weather, recipes and videos.

Artificial intelligence is coming on in leaps and bounds.  In a TV programme on Channel Four recently we saw computers forming new neural networks to expand their intelligence – exactly as human brains do.  We saw a computer programme beat the world champion in a complex game called ‘Go’, which involved learning on the spot and thinking ahead with strategic moves.  Although the world champion had an inscrutable expression, he was clearly astonished. The programme was the work of Deep Mind, the London based company that is leading the world in artificial intelligence.[ii]

So the little androids will be able to find out about an older person’s likes and dislikes and tailor conversations to them, just as ‘two people might do in a normal conversation’, according to Dr Chris Papadopoulos from the University of Bedford.”[iii]  Dr Papadopoulos is working with Advinia Health Care, as part of a £2.5 million EU funded project.  Chairman of Advinia Health Care and research partner in the study, Dr Sanjeev’s Kanoria, said that there’s a pressing need for support in the social care of the elderly, and robots can help in many ways.  They can also share what they learn about individuals with carers, ‘enabling them to do their task better.’

He said, ‘Particularly for dementia patients, agitation can be reduced by offering culturally-appropriate care support.”

The idea has appalled some. Judy Downey, of the Relatives and Residents Association charity, said: “This is treating people like commodities. The key to looking after someone is having a relationship in which you might notice if someone is upset after a phone call or if they look unwell. What matters is the smile, the human touch.”[iv]   It also begs the question whether it is ethical to encourage people with dementia, with impaired cognition, to engage with a robot that converses like a human, although they do not have a humanoid shape.  Conversations develop relationships.

Her concerns were echoed by Dr Jonathan Sacks, who looked at the moral challenges that the new AI is bringing, in one of a series of radio programmes about morality.  He said that we need these systems to be answerable to our values,’ [v] and discussed ways in which our values could be defined, which would include discussions with religious leaders and others, and be embedded into the systems.

The debate is taking place in a care system that is in crisis to the point of collapse, say some, not only because of severe underfunding, but a chronic shortage of care workers.  A survey showed that almost seven percent of jobs in the social-care sector are vacant, while projections show that the care workforce needs to grow by 2.6 per cent a year to keep pace with rising the elderly population. However, the workforce is only rising by 2 per cent at the most – meaning the shortage will only increase.[vi]  Another commentator has pointed out that at £15,200, a robot costs less than the annual salary of a care worker.

A newspaper article[vii] shows how the robots can be a great, practical help to frailer older people in their own homes, and it’s clear that, to an extent, they can help support carers in residential care homes.  The question is how far we are prepared for them to interact at a deeper, personal level with residents, especially those with dementia?  God designed people to develop in relationship with one another, the scriptural ‘I – Thou’ principle espoused by philosopher Martin Buber in his classic work published in 1923, that deeply influenced the trail-blazer in person-centred dementia care, Professor Tom Kitwood (Bradford University).  Kitwood referred to it in his ground-breaking book, ‘Dementia Reconsidered’ that is still the gold standard of dementia care.  What would Kitwood think of residents and robots? 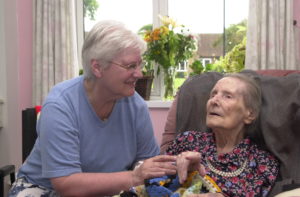 In our care homes we have trained ‘hummingbirds’, staff who come alongside residents with dementia to engage them in conversation on topics that are meaningful to them.  And we are blessed by volunteers from local churches who come in to share their time, and give spiritual support.  If there’s a ‘take-away’ thought from this article, it’s to pray for more staff, and more volunteers, not just for our homes but all those others who are doing their best.

God speaks in the darkness

What will you be doing in church on Sunday 1st October?