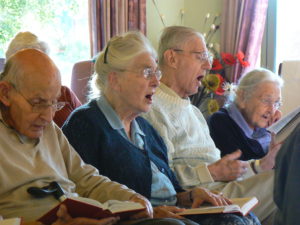 Recently, I wrote to a Christian magazine in response to a reader’s letter saying that elderly Christians should go into secular care homes to share their faith with those who had none.  I wrote that God hasn’t called elderly Christians to be lone rangers in their faith, and that when they become frail enough to need residential care (especially those with dementia) many need spiritual support more than ever.  They need the ministry of the Holy Spirit – the ‘deep calling to deep’ that Psalm 42 describes. It’s not unusual to see residents, even with quite advanced dementia, responding to Scripture and worship.

I wrote about an elderly relative of mine, a fervent Christian, who went into a ‘normal’ care home and had the joy of rekindling faith in one or two of the other residents. But, one day when I visited, she whispered that she had been rebuked for say­ing she wanted to go Home to be with the Lord. The carers took it as a slight on their ability to care and she was told not to speak like that again. Yet more than anything, at that time in her life, she needed that ‘hope of glory.’

The magazine published my piece in full.  But just above it was a photograph of a pathway with a sign pointing to a cemetery, with another sign next to it saying ‘dead end.’  The picture related to another story altogether, about the war in the Middle East.

Yet that’s how many people think about life in a care home, as having reached a dead end.  But nothing could be further from the truth!  Our residents encourage one another and build one another up in the faith. One lady chose to stay on after her husband had died when she could have very well gone home and pleased herself.  But she wanted to stay on to help the staff and to minister to others, and so she did for 10 years.  She would get up early and pray for every single person in the home before breakfast.  She would sit alongside residents before the carers came to help them to bed, and encourage them with a Scripture verse and a thought.  In all our housing and homes there are supporting activities in prayer for mission work all over the world.

As you lean into the Lord towards the end of your pilgrimage it seems that the walls between this world and the next become thinner.  My colleague Carl was visiting our home in Tunbridge Wells today and he told me about a lady there whose sight was very poor and who was almost deaf, yet who said that she was ‘content’.

On Friday I’ll be at our Bethany home in Plymouth for a day of prayer.  Last time I went a lady thanked God for the friendships among the residents, as well as the lovely staff. I was reminded that although the “earthly tent” can be weak, the ‘inner man’, the spirit of the person goes from strength to strength, from one degree of glory to another. It’s a period of intense spiritual growth, quite the opposite from being at a ‘dead end’.

Why God’s song is best

Stamp out ageism before it stamps on you!

Have you tried standing on one leg, lately?