Andrew Brown realised something was wrong when he couldn’t fit his key into the lock of his front door.  Then he noticed that the wooden frame had been damaged, and realised that someone had tried to break into his house.

Inside he found a note from the police on the hall mat,  with a printed report stating that intruders had been seen trying to force open the door but a witness had chased them away.  He wrote how grateful he felt to that person. 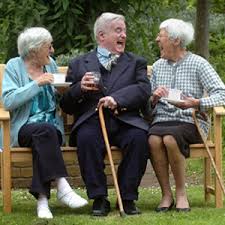 He was equally glad that a quality of ‘neighbourliness – semi strangers being careful of each other, survives,’ adding that, ‘in cities that work properly, people keep an eye out.’[i]

Where we live, whether it’s in cities or towns or urban areas or country villages, the thing that makes them ‘work properly’ is having a sense of belonging.  And a sense of belonging is engendered by lots of small daily contacts with others that build a web of trust and fellow feeling between people.  ‘So that when the chips are down a citizen may take responsibility, stick up for someone else and resist barbarism.’

And also, hopefully, spend the time of day with older people living there.  I’ve written before about the powerful benefit that living in a community minded neighbourhood makes on older people.   In ‘Dementia: Pathways to Hope’, I write about a few of these places, and how they have meant healthier lives for everyone, older people especially.  Building community takes a little time and countless small touches.  But it’s so worth it.

Here in Wales, my church is ‘community mad.’  Teams go into the neighbourhood on the slightest pretext – it could be giving out Easter eggs or invitations to barbecues in

the grounds, or to bring the children into a particularly inventive play area – anything at all that’s relevant.  This week has been a holiday outreach, culminating in a fish and chip dinner in Cwmbran’s finest…  And it works!  Last evening was a special kind of evangelical outreach with a Christian (Edinburgh – fringe) comedian talking on ‘The Good, the Bad and the Ugly.’  Afterwards, standing in the lobby and looking at a table loaded with fresh fruit from a local allotment  I noticed a young couple looking at it, too.  Turns out it was their first time in church, but from the expressions on their faces, I don’t think it will be their last.