‘Jeremy Hunt’s eyes start watering as he talks about the “terrible” treatment that some elderly people in Britain are still forced to endure in care homes,’  begins an article in the Telegraph today.[i]

What a strange thing to say.  He knows perfectly well that the majority of care homes give excellent care, despite the fact that most are paid well below the cost of care by their Councils, meaning that not only are self-funders cross subsidizing these costs but that providers struggle to pay staff and training costs.  More carers and better training, plus real management involvement would bring these poor homes up to standard.

Ours are renowned for high standards and their loving care, but were it not for our faithful supporters, we wouldn’t be able to do half the things that we do.

Shouldn’t Mr Hunt’s eyes be watering about the sharp rise in deaths of over people aged 65 and over, particularly 80 year olds?  Life expectancy was rising for this age group until 2013, then instead of being a positive figure of 6 years 40 weeks for a woman aged 85,  it’s now a negative figure of minus ten weeks.

He could be more on the button when he says it could be because of cutbacks in social care, which had been ‘hammered’ in recent years.  There’s not enough help for the frail and vulnerable, because of the failure of successive governments to grasp the nettle, he stated.

Caroline Abrahams of Age UK is more direct.  ‘It’s like the canary in the coal mine,‘ she said, ‘Telling us something has changed for the worse. The most likely culprit is the rapid decline of state-funded social care, which is leaving hundreds of thousands of older people to struggle on alone at home without any help.’[ii] 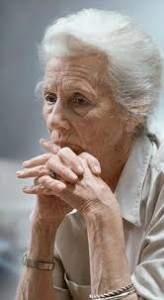 Mr Hunt also said that ‘dealing with dementia is a ‘litmus test’ of how Britain is “rising to the challenge of an aging population.’  And how well does that look?  He says that ‘We are well on our way to diagnosing two-thirds of people with dementia, which is a massive improvement,’ but doesn’t give the basis on which these numbers have been calculated.  (Has he taken into account the figures given last year at the International Alzheimer’s Conference in Copenhagen which showed that the prevalence is actually dropping in the UK?)

And how can it be a massive improvement when, by his own admission, people are not being given the care and support they need?  Something that GPs pointed out to him when NHS England offered them £55 for each new diagnosis, late last year.

Who benefits by higher numbers when there is no care in place for the individuals themselves?  To use an old saying, what’s the point of driving the horse to water when there’s no water in the trough?

Just a little point before moving on… Mr Hunt refers to ‘people sitting in a semi-circle’ in care homes as a bad thing.  But I asked one of our care home managers about this some years ago.  She said that older people preferred this seating arrangement because they can see everything that’s going on in the room.  Also, people with dementia don’t like to be approached from behind; they find it startling, and can hit out to defend themselves.

It’s easy to project our own preferences on to other people, not understanding that their preferences may be different.  But it’s not easy to ignore the fact that older people are suddenly, and unexpectedly dying.  If it’s because of cuts in social care funding that does not make Britain a safe country for them – or for us.  Because, the likelihood is that we will all be old one day.

What will you be doing in church on Sunday 1st October?

Is money ever worth more than life?