‘He is risen!’ has been sounded through our congregations this morning, with the rejoinder – ‘He is risen indeed!’

It reminds me of one of the most extraordinary stories in the Bible – one that shows how deeply Jesus values each individual.  Enough to interupt the most important journey in the history of the universe.  I wrote about it in ‘Dementia:Pathways to Hope,’ and because it’s Easter I’m repeating it here. 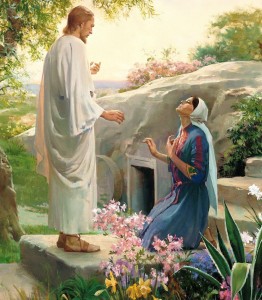 When times are tough it’s so easy to believe that God has taken His eye off us –  that Jesus is tied up with more important things.  But there’s an account in the Bible of when Jesus interrupted the most important journey in the history of the universe to comfort one person.  The story in John’s Gospel (20: 11-18) tells us that after His resurrection He stopped outside the tomb to speak to a grieving Mary Magdalene.  Mary was there all by herself.  I believe that it wasn’t just her grief, but the feeling that all of reasonable life had ended for her, even, perhaps, that the demons He had cast out would return.  She had made Jesus the centre, the rock of her life and now He had not only been murdered, but His body stolen.  All trace of Him had gone from her life.

Jesus was on His way to present His resurrection body to the Father God, to put the full stop to the sentence that was written before time began that would usurp Satan’s claim to the earth and restore to it the ownership and authority of Heaven.  He was the sacrificial lamb and the Priest ‘Holy, harmless, undefiled, separate from sinners, and made higher than the Heavens, (Hebrews 7:26), and the presentation to the Father would reverberate throughout all eternity.  Yet He paused this momentous journey for Mary.

‘Don’t touch me,” He cautioned, “for I haven’t yet ascended to the Father. But go find my brothers and tell them that I ascend to my Father and your Father, my God and your God.’  Some commentators say that He was warning Mary not to cling to Him, not to hold Him back, and others point to the commandment in Haggai 2:13 about the rules when presenting the sacrificial blood of atonement.  He was preparing to enter the heavenly temple with His own blood to obtain eternal redemption for us.   But whichever way you look at it, whatever the reason, the fact is that He paused to speak to a woman with a broken heart.

Every story in the Bible is there for a reason.  I believe that this one is the pathway to one of the greatest hopes – that Jesus will meet us at the point of deepest need, even in dementia when all trace of Him seems to have gone from our world.

The Criminal Scam That is Stealing People’s Homes

Victoria’s Seven Signs of Ageing and Joy in Maturity

Only the answerphone for company on Christmas Day