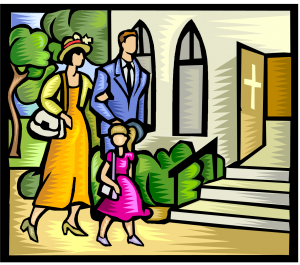 A number of studies have shown that people who go to church tend to live significantly longer than those who don’t.    And, according to the lead scientist who led one of the studies, it isn’t simply because church goers have more social support, but because worshippers are flexing spiritual muscles.

A study in two American States surveyed 5,449 people with 64 per cent being regular worshippers.  It was led by Professor Marino Bruce, a social and behavioural scientist at Vanderbilt University in Nashville, Tennessee, and Keith Norris, professor of medicine at the David Geffen School of Medicine at University of California Los Angeles (UCLA).

The study found that men and women aged 40 to 65 years old, who attend church or other places of worship reduce their risk for mortality by 55 per cent.  The effects remained after education, poverty, health insurance and social support status were all taken into account.

Professor Bruce said. “We found that they go to church for factors beyond social support. That’s where we begin to think about this idea of compassionate thinking, that we’re trying to improve the lives of others as well as being connected to a body larger than ourselves.’ [i] He added that, ‘being in a place where individuals could flex those spiritual muscles is actually beneficial for your health.’

‘Compassionate thinking’ is a practice in cognitive behavioural therapy. Studies have shown that it helps individuals banish unhelpful, negative thinking, and that repeated compassionate thinking helped establish a healthier view of themselves and their lives.[ii]  Once again, secular researchers have stumbled across a biblical truth that’s been there all the time.  ‘Be kind and compassionate to one another, forgiving each other, just as in Christ God forgave you,’ says Ephesians 5:32.

But going to church is not a kind of spiritual gym.  The Professor seems to have missed the point. Yes, being in church is about fellowship, but the connection is not just with the people who are there – it’s with the One who drew them there in the first place.   Selwyn Hughes, founder of Crusade for World Revival, and author of the popular ‘Every Day with Jesus’ booklets, summed it up when he wrote,

‘How do we get the framework, the sense of structure we need to be able to move effectively from one day to another, in a world where everything that seemed to be nailed down is coming apart? It is to be found in our worship of God. We enter into the presence of the Lord and lo, His unity becomes our unity.’

Church is so much more than a spiritual workout.

Put some rocket fuel under this agenda!