Some months back I wrote about the three men who came into the store where I was waiting for my new phone contract to print out.  They were clearly granddad, son, and grandson, and they told the assistant that they were looking for a tablet for granddad so he could use ‘Hang-Out’ to keep in touch with his friends and relatives overseas.   It was hard to tell who liked the technology the most – they picked up different tablets and tested their merits and granddad was keen to get started. I’m sure that, by now, granddad is as expert as his son and grandson.

The number of over 75s using social media has nearly doubled in the last year, Ofcom has found, with a ‘striking’ rise in the number of older people using tablet computers and signing up to sites such as Facebook. It’s a great way to for older people to keep in touch, and helps alleviate loneliness.  But the new generation of users are not as ‘savvy’ as the younger, and are more at risk from online scams.

‘The scamming is a real issue – my parents have been nearly deceived,’ said a correspondent, ‘It’s not just out and out scammers but also pressured selling.  My parents bought a solar panel after a hard sell and it’s been a nightmare.’

Someone I know, a sensible, intelligent lady in her early 70s, admitted that she’d been scammed.  She’d developed an online friendship with a man who turned out not to be all that he’d claimed, and just in time – before sending him money, she realised what was going on.

So how can we help our ‘silver surfers’?  The granddad I mentioned earlier would have the easy, natural protection that comes from having family around – but what about those whose families have moved away? 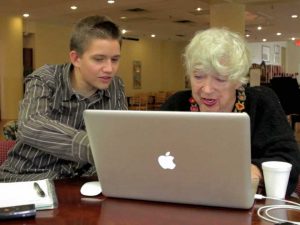 At a church I visited in the north they had an informal kind of ‘club’, where the young members, (who seem to have been born with inbuilt operating systems)  helped the seniors with their Smartphones and tablets.  The young loved showing them how to do it and the older ones loved watching them, some  catching their enthusiasm at the same time.  Is it something that most churches could do?

Could pastors mention the danger of the latest scam, perhaps on a Sunday morning?  And, at the same time, email house group leaders?

Or how about a church advertising a ‘Silver Surfers’ Safety’ meeting, inviting older people from the community?  Led by a couple of technically minded members?

There’s a good deal of information that would help.  It would have to be updated from time to time, to meet new challenges.   Scams tend to stream through the internet in spurts.  Some are obvious, like the gentleman from Nigeria who offered to change my life with a substantial amount of money if I would simply email him my bank account details.  But some are more subtle and consistent.  If I see an interesting gadget on a website that is new to me, for instance, rather than risk my outlay on a ‘stranger’ I’ll see if it’s available at a local outlet, or on Amazon.  Seniors could be shown how to do this.

Email
Tags: having younger help the older, helping older people with the internet

Home alone at Christmas? A dozen things to enjoy on your own!

Ooops – the date is sooner and the urgency stronger!