Going through the items for the Pilgrims’ Magazine I’m working on, I came across this lovely story, but can’t trace the person who sent it to me!  Hopefully, someone will read it and let me know.

Links with the Homeland 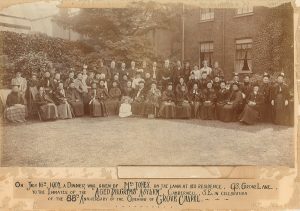 It occurs to me with surprise that it was over fifty years ago that a friend from University who was a visitor at the Camberwell Aged Pilgrims’ Home asked me to visit a lady in the Hornsey Rise Home, explaining that she was blind and received very few visitors.  After walking past this mysterious place so very many times over the years without ever seeing anyone enter or emerge,  I felt quite excited at the prospect of entering those mysterious gates and discovering what lay beyond.

Miss Ada Knight was a sweet lady whose beautiful eyes gave no hint of her affliction. She told me that one morning she had awakened to find that she had suddenly gone blind overnight. It was typical of her that she had not felt any self-pity, but instead her first thought was about what would happen to her budgerigar and how she would cope with looking after him. She would hover near his cage addressing him as “pretty boy” and enjoying the sound of his chirping back at her.

She may not have had many visitors from outside, but there were many kind people in the Home who were eager to help with errands and with reading to her. It was from her, I recall, that I discovered that our local milkman had come to know the Lord!

Miss Knight had spent many years as a lady’s maid and the lady she loved to tell me about was none other than Lady Lister, the wife of the legendary Lord Joseph Lister, the father of antiseptic surgery. She always referred to her as “my lady” and spoke of her with warmth and affection. It is over a century since Lord Lister died and I find it amazing, looking back, that I can feel connected to him through that one human link!  Miss Knight was very firm about social boundaries and I could never prevail upon her to call me by my Christian name!

I could only call in on Miss Knight during the vacations and I think that it was while I was away that her great friend Miss Violet Lane,  wrote to tell me that she had died, urging me warmly to continue to call in at the Home to see her. Thus I continued to be a visitor and I enjoyed the company of Miss Lane, a vigorous lady who made little of the hardships she had faced in life. She had been one of ten children and when the parents died, they were split up and sent in different directions. Her eldest sister had made an effort to maintain contact, but it had all proved too much for her and eventually Miss Lane found herself without any idea of where her various siblings were or, indeed, if they were still alive.

She had made the best of such opportunities as presented themselves and had passed quite a stiff clerical exam to enter the Post Office. In those days it was seen as a prestigious job and attracted fierce competition. She had, to my fascination, been posted to Aberystwyth, where I was studying. She had treasured some postcards of the damage done to the Promenade by some very dramatic tidal waves, which she gave me as a present. A couple of years ago history repeated itself with a fierce storm and there was a similar scene of devastation along the sea front.

While inmates of the Home were able to cope and look after themselves, they continued to live in their cosy little rooms, but the time came when Miss Lane was too ill and frail to care for herself. I visited her in the dormitory of the sanatorium where she now resided, all her worldly goods consigned to a small locker beside her. Her voice had sunk to a hoarse whisper, but her face was radiant and put me in mind of the glowing face of Stephen as described in the Book of Acts. I bent down to hear what she was saying. “Do you know our Saviour as I do?” she asked urgently.

I often remember that last visit as I myself move nearer to Heaven and look forward to seeing those two inspiring ladies again.

Frail elderly thrown out of hospital to die

Have you tried standing on one leg, lately?

Ukraine – a Halleluia in the presence of the enemy