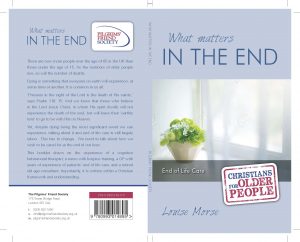 I’ve just finished working on a little booklet called, ‘What Matters in the End:   End of Life Care’.   There were several interesting discoveries I made while researching for it, but one of the most significant is that people don’t like talking about the end of their lives, even Christians.

It confirms the frustration of the GP who stood up during Question Time after a talk I’d given at New Wine (Preparing for a Great Old Age).  She took the microphone and asked why Christians were not willing to talk about this very thing, and why so many seemed to be afraid of death. She was quite exercised about it, and spoke volubly and passionately.

I thought then, and still do, that most of us aren’t afraid of death itself, that is, of being ‘away from the body’ as the Apostle Paul puts it, but we can be anxious about the process itself, that is,  the manner of our dying.  Although we know for sure that it’s something that everyone on earth will  experience  it’s something that no-one who has gone through it can ever  tell us about.  (To paraphrase the sales signs in the stores – once they’re gone, they’re gone!)

We do know though, that Heaven, our destination, is a place that is ‘beautiful beyond description, too marvellous for words!’  1 Corinthians 2:9 tells us that no-one has a really good grasp of how it’s going to be.  I like the Matthew Henry’s commentary on 2 Corinthians 1:22 which says, ‘The Holy Spirit makes Christians firm in the faith of the gospel:  the quickening of the Spirit is an earnest of everlasting life; and the comforts of the Spirit are an earnest of everlasting joy.’  The quickening of the Spirit is an earnest of ever- lasting life!  Halleluia!  Paul also mentions something similar in his letter to the Christians living at Ephesus , Ephesians 1: 11-14.

Neither do we want to think how we will cope if we become frailer in old age.  Research  commissioned by Independent Age that found that 67 percent of people between their mid-60s and 61 percent of the over-75s have never talked about who would care for them – and many intend never to discuss it at all.  Based on the findings, say Independent Age, there are three million elderly ‘deniers’, who are refusing to face up to it.  There are another three million ‘delayers’, who say they are planning to have conversations with their families about it, but not just yet.

There are exceptions, though.  Our older residents often say how they are looking forward to going ‘Home’.  Some even ask why the Lord is delaying.  Not because they’re in pain or are feeling desperate, but because the walls between us and Heaven often seem to be thinner the closer you get to them.  An elderly aunt asked a friend of mine, ‘What is this Easter music I am hearing?’  And Winifred, one of the loveliest ladies I’ve ever met, was so looking forward to seeing the Lord her joy at the thought was contagious.

As for me, I’ve discussed it with my daughter who says she can’t wait for me to be old so she can look after me.  Really! (Perhaps she wants to get her own back!)  And I’ve written up my funeral service to make sure it goes exactly the way I want it, with uplifting hymns and songs and none of the old Welsh heirith and gloom.  I’ve even outlined the sermon for the pastor.

But in the meantime, the booklet on End of Life Care, and the talks we need to have, will be published in a few weeks’ time.  If you’d to reserve a copy, drop me a note.  If nothing else, you could leave it on the coffee table for everyone to see.  That might prompt some discussion!

email
Tags: End of life care, New booklet, what matters in the end

If goodness shines to the Heavens, this Hospital is a lighthouse