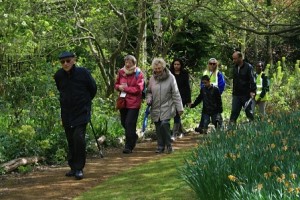 Study after study has proved its effectiveness.  It prevented the early death of dozens of elderly people in one Japanese village, after they’d become sedentary after the 2011 tsunami.

In a 35 year study of 2,500 people in Caerphilly, in Wales, it delayed the development of heart disease by 12 years, and the onset of dementia by 18 years.

If people took it, the NHS budget could be cut by 70% – the amount spent on people with chronic conditions that could have been avoided or alleviated.

The ‘miracle cure’ is exercise, according to a report by orthopaedic surgeon Scarlett McNally, for the Academy of Medical Royal Colleges.  The report entitled, ‘The Miracle Cure and the Role of the Doctor in promoting it’, points to evidence that exercise prevents a whole range of diseases. It says that doctors should give clear messages to patients about the benefits of 30 minutes of exercise five times a week.

Nearly half of all adults are sedentary for more than five hours a day, driving or sitting in front of a computer or TV screen. In 1949, 34% of miles travelled were by bike. Now that is just 1-2%. Half the population does not take enough exercise and in the over-65s that drops to less than a third.  Yet simply being more active can avoid years of ill health. A Europe-wide, 12-year study from Cambridge University, found that inactivity caused twice as many deaths as obesity alone.

Scarlett McNally said that doctors have to rethink what is accepted as normal, because what is being seen in hospitals and surgeries up and down the country is that normal means not having enough exercise.  She said, ‘Too many of my patients are paying the price for that with broken bones and years of ill health that could have been avoided by being more active.’

One way to take enough exercise is to get a dog, she added.  People who regularly walk a dog are 34% more likely to get sufficient exercise than others. Other options are dancing, swimming and walking. The activity should be vigorous enough to increase the heart rate slightly and get a bit sweaty.

The chair of the Royal College, Dr Maureen Baker, said that simply telling patients what to do is not enough.  ‘Long-term behaviour change is very hard and requires ongoing support and access to help over time,’ she said, ‘We need more resources in general practice and more GPs so that we can spend more time with our patients on preventing them getting ill, as well as caring for them when they are ill.’

Toilet rolls; technology, and a bedrock of human kindness

The older blessing the younger …