More boys suffer from autism than girls.  And more older women suffer from Alzheimer’s than men.  Yet a new discovery shows that the same gene, when mutated, could be the underlying cause of both, according to scientists at Tel Aviv University. 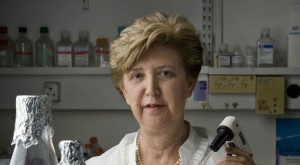 The gene is called ADNP.  Team leader, Professor Illana Gozes has been studying it for 15 years.  A major finding is that it affects males and females differently.  Professor Gozes said,  ‘ADNP may be new to the world of autism.  Its gender-dependent expression changes male and female chemical tendencies toward different neurological disorders. Male and female mice may look the same and their brains may look the same, but they are not. When the expression of ADNP is different, it may cause different behaviours and different cognitive abilities.’

In a study last year Progressor Gozes and the TAU team discovered how loss of NAP, a snippet of ADNP essential for brain formation, exposes cells to physical damage that eventually destroys them, triggering dementia-related diseases like Alzheimer’s. However, applying proteins with NAP-like properties to cells makes them healthy again — opening the door to possible treatments for Alzheimer’s and other degenerative diseases.

A current study, published this month in the Journal of Translational Psychiatry, sheds even more light on how ADNP affects Alzheimer’s patients. In the study, Professor Gozes and her team examined the behavioural response of male and female mice — both ADNP-altered and normal — to different cognitive challenges and social situations. To do so, they removed one copy of the ADNP gene from some mice, and then examined their respective responses to unfamiliar objects, odours, and other mice. In the younger male mice, the lack of ADNP caused deficiencies in object recognition and social memory, typical of autistic behavior. However, for older females, the removal of the gene caused them to become withdrawn and socially deficient, a hallmark of dementia-related diseases, especially Alzheimer’s.   Given the sex and genotype differences in ADNP positive or negative mice the team were keen to see ifADNP expression is sex-dependent in the hippocampus, a brain area directly associated with learning and memory.

The next step is to expand the study and extend it to human clinical trials. Professor Gozes said, ‘This study emphasizes the need to analyse men and women separately in clinical trials to find cures for diseases, because they may respond differently.’

Further work is needed, added the professor, but the team’s research could one day turn into a treatment to alleviate, or even reverse, Alzheimer’s disease, as well as autism.

Battling wind and rain, but half way there!

No surprise that dementia caregivers are stressed and depressed