At present, to sit on a jury you have to be aged between 18 to 70.  But now the maximum age is to rise to 75, because, says Sir Oliver Heald QC, the justice minister, ‘People are living longer, healthier lives, so it is right that our courts are able to benefit from the wisdom and experience that older people can offer.’ (Telegraph, 13.11.16)  Older people not only have a great deal of life experience, but also remain astute, savvy and worldly-wise, the Director of Saga, Paul Green, observed. (Independent, 12.11.16).  By extending the age limit, some three million extra eligible adults will be added to the jury pool.

The older generation do more for us than we realise.  The RVS (formerly WRVS) published  a study by leading economist consultants, SQW, showing that over 65s made an astonishing net contribution of £40 billion to the UK economy through, amongst other contributions, taxes, spending power.  ‘Even taking into account future costs around providing pensions, welfare and health services to a larger and longer living population of older people in the UK, over 65s’ net economic contribution will actually grow to £77.’  You can read the report in full, with more information, at the website link below.(1) 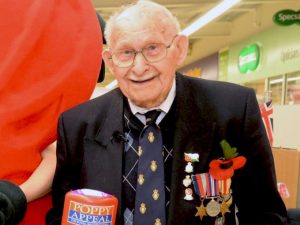 How much we owe to older people is typified by 99 year old Ron Jones.  Every year, old soldier Ron sells remembrance poppies at a stand in his local supermarket.  Ron was a prisoner of war in Auschwitz, and was one of the hundreds forced to join the ‘death march’ of prisoners across Europe in 1945.   Most of his comrades in his Welsh regiment died, and for 40 years now he’s been selling poppies ‘so that people will remember what has gone before them.’

But instead of honouring the sacrifices of the older generation, a rising intergenerational war is painting pensioners as stealing the nation’s wealth and the cause of the economic woes that young adults are experiencing today.  Press articles have headlines such as   ‘‘Generation Y Betrayed,’ implicating the older generation.   The aim is to persuade government to take benefits from pensioners and give them to young adults.   The statistics and arguments are dubious, to say the least.  Last Thursday, at Salford University, I gave a talk on how we can harness the power of the older generation to benefit us all.  If you’d like a copy of the slides and notes, let me know.

God designed old age on purpose.  Let’s honour them, and what they do for us.

Monty Python and Social Care for the Elderly