Usually, I write about older people and the issues that affect them.  Today’s blog is slightly different.  It’s about mothers – a younger mother and two older mothers, and in a sense for all mothers who’ve found themselves in similar situations.   So that you’ll pray for them. 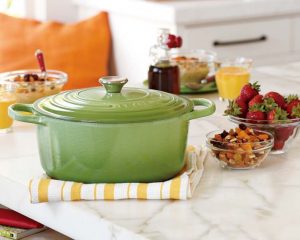 I met the younger Mum near the green Le Creuset shelf in Sainsbury’s.  Not the branded Le Creuset, but pots similar in weight and shape. I was looking and wondering how could Le Creuset pots be green? Traditionally, they’re flame coloured.  I have one at home that’s brilliant for making stews and bolognese and curries because you can bring it to the bubble and then turn off the heat and it goes on cooking.   But I only have the one because it needs a lifting hoist to get it on and off the stove.  So, were these really Le Creuset style or were they just shaped like that? I picked up the nearest lid and yes (sacré bleu!) nearly dropped it. They were green Le Creuset style pots alright, on offer at a discount, too.

‘They’ll have to reduce them more than that before they’ll sell,’ said a voice to my right.  ‘They’re the wrong colour.’

We began to talk,  firstly about the pots and how she uses hers (she makes wonderful lasagne and puts grated carrots in with the meat so the kids will get some vegetables), and why green is the wrong colour.  Then, as we turned the corner near the frozen fish  she began to tell me how how sad she’d been to find, on returning from years in New Zealand, that people here have changed and aren’t as friendly as they used to be.  I was so astonished I could have slipped into the fish cabinet because here in South Wales you only have to smile and you’re into a conversation.  But there was a sadness about this lady, whose name is Sally ( I’ve changed a few other facts to protect her identity):  the sort of sadness you sense even when the person is laughing.

Long story short – she’d had a tough start to life, but had given her life to Jesus and all went well until she married.  Then, she said, ‘My husband took it all away.  I just feel empty inside.  Just empty.’  Her husband argues that if God existed, children would not die of illness, that He would prevent evils such as the slaughter in Syria, and so on.  Sally has three children, a very full life, and her husband has a good job, but she feels empty.  (Yes, there is 2 Corinthians 6:14, but how many women do you meet who feel their husband will change once they’re married?)

Of course you feel empty, I explained.  Because, as an ancient bishop once prayed, ‘Thou hast made us for thyself, O Lord, and our heart is restless until it finds its rest in thee.’  God made us in His image, and He is like a magnet to our souls.  Ask Him back into your life, I urged.  Get an easy to read modern version of the Bible, say, a New Living Translation.  Read psalm 139, John 3:16…  ‘I could listen to you all day,’ she said.  ‘It’s not me – it’s the Holy Spirit drawing you back to Him,’ I told her because, clearly, that’s exactly what He was doing.  ‘Come to church on Sunday,’ I added, giving her the church address, ending, ‘I’ll pray for you, Sally.  And you, you talk to God.’

Do pray for Sally.  We know that God knows exactly who she is.  She’s the lady who knows the green Le Creuset pots in Sainsbury’s have to come down in price before they’ll sell.  It blesses me that this loving and powerful God, who has numbered every hair on her head, put her next to someone who could talk for the whole of Wales when it comes to knowing Him.

And not forgetting the older mothers.  Both are in their early seventies, and loved their ministries for the Lord.  One used to delight in cleaning her church and the other (in another, bigger church) used to be a prayer co-ordinator.  They’ve both been asked to stand down by their pastors (men in their 30s and 40s) because of their age.   Both feel rejected and disenfranchised.  Do pray for them and for their pastors, and for others like them.

Why the National Trust is missing its ‘national treasures’.