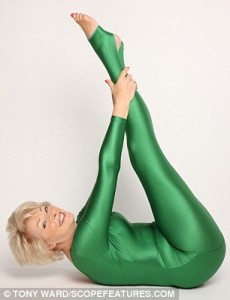 I met two Welsh versions at the gym this morning.  Both in their sixties, they were so toned and shapely they looked a good thirty years younger – bright eyed and fresh faced.  I wish I’d had my camera or phone with me, but when I’m in my gym clothes there’s no  room for anything else!  Sue was off to the ‘Combat the Body’ class which sounds like the perfect training for fighting Jihadis.  She said she started exercising 11 years ago after a life spent as a couch potato.  ‘It’s not just my body that feels great, it’s my mind as well.’  Proof that  exercise is good for the brain as well as the body, and can help prevent two of the scourges of old age – depression and dementia.

Now a newly published study by researchers at King’s College London show that it isn’t simply growing old that makes people doddery and infirm, it’s sitting around doing nothing. [i]

‘We had assumed that there is a linear straight line decline in physiology with ageing but that is very unlikely to be the case,’  they say.

Studying a number of cyclists of different ages, the team  found that there was little physical difference between people aged 79 and those aged 55 if they maintained similar levels of exercise.

In a basic test which measured the time taken to stand from a chair, walk three metres, turn, and sit back down, even the oldest cyclists were well within the range of healthy young adults.

Emeritus Professor Norman Lazarus, a member of the King’s team said: “Inevitably, our bodies will experience some decline with age, but staying physically active can buy you extra years of function compared to sedentary people.

Jane Tadman at medical research charity Arthritis Research UK said “The findings of this study back up our own research in the fact that many symptoms associated with ageing such as frailty are caused by being physical inactive. So many of our population are now living well into their 70s and 80s, and that should be a cause for celebration.

“But unless we can ensure that old age is spent in good health through remaining active, and this doesn’t necessarily meaning visiting the gym, it could be climbing the stairs on a regular basis, it will be a stage in life that is endured rather than enjoyed”.

In some cases, people have put off the last stage of old age until their nineties, or 100s.  In one of our care homes I met a lady who hadn’t put her name down until she was 93, and then ‘just in case’.  She was 103 when we met.  The oldest person I’ve interviewed so far was a retired teacher, aged 112.  They all led fairly active lives.  Watch Jessie Jordan being interviewed on her 105th birthday.  https://www.youtube.com/watch?v=rtkAFn9RWJc

‘I’m thrilled to be ancient. I could only wish that everyone has as wonderful an old age as me,’ says Molly Parkin, 82, fashion editor turned writer and painter, who is one of 14 leading designers and artists exhibiting her work in the windows of Selfridges from Thursday.  Her work is part of an exhibition entitled, ‘Bright Old Things’, a celebration of the retirement renaissance highlighting inspiring individuals who’ve embraced a new vocation later in life. Read more about it here at  http://www.selfridges.com/content/article/bright-old-things/?cm_re=Homepage-_-Slide1-_-BrightOldThings.

Looking like the green goddess may not be your thing – but as more and more of us live to old age, it makes sense to make sure it’s a good one!