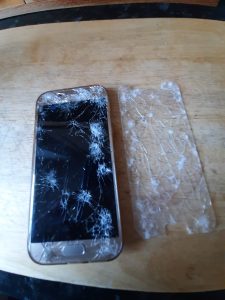 This may look like just a shattered mobile phone. But it’s more than that. It’s an allegory! It’s the phone that 19 year old Luke put together for me months before the accident that killed him last December. He sat at the kitchen table working on it patiently asking questions like, ‘do you want Messenger on the front screen?’ and showing me how it worked. ‘Switch on the security screen before you put it in your bag,’ he sighed when I asked why the icons moved all over the place when I put it in my bag. After his death I particularly treasured that phone.

Then, on 16th July, getting flowers out of the garage where they’d been keeping cool, I put the phone on the top of my car, and drove off, forgetting to pick it up. It disappeared, of course.

The flowers were for my son Hywel’s committal service in an old church in the village, where generations of his father’s family had worshipped. Luke had been very much like his Uncle Hywel – they were both tall and gentle and clever, with a droll sense of humour. Hywel’s wife Jana and their son Tim brought over the ashes from South Carolina, where they live, together with those of their two little children who had only lived a short while.  So, even though it was my own fault for being careless, my grief was hugely deepened by losing the phone on the same day.

But here’s the wonderful thing! Seems it had stayed on the car roof till we reached a big roundabout, then swung off to the ground, where it had been discovered by a man called Joel, who found my card tucked into the back of the case. He’d called my landline straight away but because it was a tumultuous week I hadn’t thought to check the answerphone until today. Joel lives not far from the church so I went straight away to collect it. I am so grateful to him.

The phone’s safety screen and screen were so shattered that you couldn’t see a thing, but it was still working! Joel said it had pinged and rung a couple of times but he couldn’t communicate with it. (Tim was pinging it, and we left a message on it for whoever might find it.) 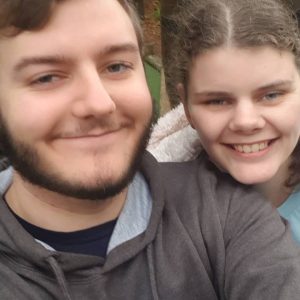 In the meantime Luke’s girlfriend, Ami, has moved all the contents and settings of the old phone into a new one,  retrieving everything via the Cloud (and negotiating a deal with Tesco that saves me £10 a month!).

Now here’s the allegory! Luke died instantly, hitting a telegraph pole in a ditch on a deserted country road. His body was shattered. The police liaison officer told us his injuries were so catastrophic that we weren’t able to see him. When we saw the remains of his (new) motorbike we understood a little of what he meant.

But, like the mobile phone (only in an infinitely more powerful, more real way) Luke – the essence of Luke, lives on. He had committed his life to Jesus Christ many years ago, and we know that he’s now with our Saviour and those who’ve gone before.

Writing to the Christians at Corinth, the apostle Paul said, ‘For we know that if the earthly tent we live in is destroyed, we have a building from God, an eternal house in heaven, not built by human hands.’

It may sound fanciful to liken a shattered phone that is still working to an earthly tent that’s been destroyed, but Jesus Himself used allegories and parables. I will be grateful for ever to Joel for finding it and letting me know, and I will keep the phone for ever.  I’m writing this today to show how faithful God is, and how kind.

email
Tags: the person lives on, when the body is destroyed

Social care collapsing as 900 carers quit their jobs each day

Grandmas and Grandpas – take cover. You are a danger to the global economy.