Older people are ‘virtual corpses’, ‘verging on incontinence, idiocy and peevish valetudinarianism,’  according to former Newsnight presenter, Jeremy Paxman.  His ire was roused by the Mature Times magazine  on the reception desk of the hotel he was checking into.  Produced for readers over the age of 55 (and with almost half a million of them) the magazine proclaims itself, ‘the voice of our generation .’   But not Mr Paxman’s, he insists.  In case you’re wondering, ‘valetudinarianism’ means persistent ill-health, or someone obsessed with his or her own health.

Noting that he likes to sound learned by using long words,  Mature Times Marketing Director Jane Silk shoots some back to describe him, including gerascophobia and gerontophobia.  ‘He seems to be suffering from both a fear of getting old and of older people.’  [i](Which is what I said on social media several weeks ago when he wrote that older people ‘mouldering in their bungalows with nothing much to do,’ shouldn’t be allowed to vote.) 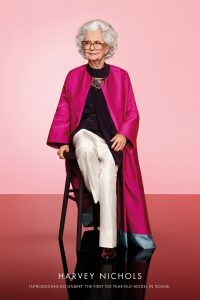 If he had bothered to open the magazine he would have found stories of people enjoying life to the full, still running races and marathons, managing businesses, and so on.  In the most recent, there’s the story of 99 year old Minnie Solomons still taking keep fit classes and showing no sign of slowing down.   Minnie’s doctor says she has the body of a much younger woman.  And the previous issue featured a 101 year old dress designer with her own label, still busy and expanding her business with new equipment.  Not forgetting one of our most successful authors, 85 year old  John le Carre, whose long awaited Memoire was published this month.   Mr le Carre has been writing for 53 years now.   I’m including some of their stories in my book What’s Age Got to Do With it? though there won’t be room for them all.

A few months ago the famous Vogue magazine celebrated its 100th edition with a photograph of a beautiful 100 year old lady in a Harvey Nichols advertisement designed by leading Agency Adam and Eve.  The  ad aimed to highlight and challenge ageism in the fashion industry. ‘Ageism is so last century’, said Ben Tollett, executive creative director. Comments under the article on the website  included one from ‘Carolyn’ who said that Vogue recognised that beauty shines from the inside.  ‘You silly woman’, rejoined ‘Jim’, ‘Did you even LOOK at this model? By ANY STANDARDS she’s a beautiful woman.’   Read more here: http://www.refinery29.uk/2016/04/109663/vogue-uk-harvey.

Arguably,  ‘Carolyn’s’ pre-conception of old age kept her from seeing that the model, (Bo Gilbert) was indeed, beautiful.    It’s a reflexive view springing from a mindset ingrained in ageism.  And it’s endemic in society.  Entrenched ageism is what skews Jeremy Paxman’s view of older people, preventing him seeing the long, fulfilling lives that many are living.  More and more people are living full, fruitful lives in their nineties and hundreds because health span, as well as life span, is increasing, thanks to better education and living standards.    Yes, there are diseases and disabilities that are more prominent in old age.  But younger generations are not seen through the lens of disability, although thousands of them suffer disabilities and ill health, so why should the older generation?

Ms Silk writes, ‘If he had made his remarks about any other minority group, whether religious, ethnic or sexual preference, he would have been shamed into making a public apology. So why does he think it is acceptable to use such spiteful language against the older generation? It is illegal under the Equality Act of 2010, but Paxman’s comments prove that such ageism is prevalent.’

We need to speak out against ageism.  I’m thinking of writing to my MP to ask him to bring it up in Parliament.   Ageism is ungracious, and ungodly, and it affects all of us.  Because one day, as long as we keep breathing, we will all be old.   Let’s stamp it out before it stamps on us, too.

email
Tags: before it stamps on you, stamp out ageism

Easter – and my son comes back to life because God’s Son gave up His.