This is one of the best books about being very old that I’ve read in a long time.  Everyone should read it, then none of us would be unprepared –  and neither would our relatives and friends. 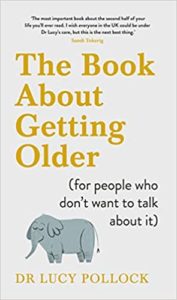 It’s by Dr Lucy Pollock, who has been a geriatrician for 30 years. (More details at the end.)

An odd thing happens when people talk about independence in the context of those who are becoming old and frail.  Dr Pollock says, ‘No one seems able to resist using the phrase ‘fiercely independent’, especially when they are talking about women. In fact, the smaller the old lady, the more likely she is to attract the label.’

Go, little old ladies, I thought, assert your independence! Dr Pollock writes so warmly about her patients that she evokes this kind of join-the-club response.  She has learnt a lot from her patients over the past 30 years. Most of all, she’s learnt that we don’t talk enough about what it’s like to be very old, which is why she has written this book.

She asks her medical students, ‘at what age do you develop a less than even chance of living another year?’ The figures they quoted are all much too low. She pushes them upwards – but none get the answer. The figure is derived from UK Census data, averaged across men and women.  It is 104.

‘Eighty is the new 60, we are told, and it really is, as most of the 20th century gains in longevity are spent in good health, notwithstanding the tricky bit towards the end,’ she writes. Libby Purves illustrated the point when she noted that “sometimes on the Alps there are days when you can hardly throw a stick without hitting a retired headmistress on a mountain bike.”

The book is mainly about the ‘tricky bit towards the end’. It’s about ‘the big questions posed by living to a very old age: what the questions are, how to ask them, and some of the answers … Life can get so much better when we get past the barriers that stop us talking about these things.’

We are all apprentice older people, yet we rarely think about those end years. Dr Pollock highlights the questions in real life case studies and describes the answers with warmth and compassion.  Irene is in hospital with a chest infection and has become very wobbly on her feet. Her heart isn’t good, she gets breathless, her ankles puff up and she feels tired all the time. Dr Pollock knows she is having the best treatment for her dodgy heart, but she doesn’t have a pill that is going to restore Irene’s vitality. The reality is that it left six years ago when Irene’s husband Tom died.  ‘I’ve had a nice life and I’m tired. I want to be with Tom.”  Everything about the conversation was more cheerful once that big question was out of the way. Dr Pollock felt they had pulled it like a parcel out of Irene’s overnight bag and unwrapped it and laid it on the blanket between them where they could both see it.  Irene’s daughter reveals that they all knew that was how she feels.

‘Older people for whom daily survival looks almost impossible often judge their own quality-of-life much more favourably than the younger onlooker would guess’, Dr Pollock observes.  A 97-year-old retired art dealer had a major stroke which left him unable to communicate and his two daughters disagreed about whether he should continue to be fed by tube. ‘One daughter described her father’s zest for life, and how when she visited the ward and put headphones on him to pour Sibelius into his ears he would smile. The other daughter said that it wasn’t a smile, it was a grimace. The first  daughter hissed back ‘it was a smile until you got here.’

Despite the huge leap in longevity we haven’t worked out yet what we want from our long new lives, or the kind of society that is best for us at all ages.  Most of us only have a vague idea about how our final years will be.  Dr Pollock’s book answers every question you could ask, and more.

She has seen the difference that the faith of older people makes to them. One of the great differences between very old people and the younger people who look after them is the different levels of faith. Faith is a rock-solid certainty for many of her patients… it is the warp and weft of their lives. It isn’t just a Sunday thing. Younger people may have faith to some degree, but often a great deal less than their parents or grandparents.

“And, my goodness, death is one of the moments in life when faith does its stuff, and belief transcends all physical concerns and lifts someone so gently and tenderly out of this world and into eternity,” she writes.

The British Geriatrics Society commends the book :  ‘this warm and compassionate book gets to the heart of old age. Using stories and accessible explanations it covers issues of declining health, quality-of-life and choices about the things that matter most.’

We will all be the better for reading it.

Having the wrong perspective could kill you