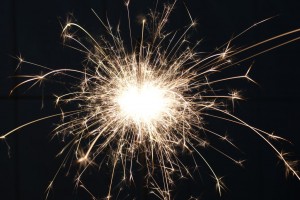 If thanks generated sparks that could be seen from space there’d be millions of them lighting up the sky at Christmas time.  And I like to think that more would come from Christians because we know have so much to be thankful for.

Now,  thankfulness for a Christian family’s kindness is now saving the lives of thousands of endangered Christians.  It’s from a former child refugee, an only child of a loving family put in desperation on a train out of Austria as Hitler invaded in 1938.  It’s described in one of the most moving articles I’ve read this year.

It’s by 96 year old Lord Weidenfeld,  chairman of an eminent publishing house, a publisher and philanthropist and a peer of the realm, a man who has been counsellor to heads of state and a Jew privileged to count himself as a friend of a crusading  Pope.

He  is adamant that he owes it all to an act of Christian charity.  In his greatest time of need as a refugee, a family of evangelical Christians took him in.  (In time they helped his parents come to London, where they were able to begin their lives anew.)The family not only gave him a home, they supported him in his studies and in his work.  With their help he went to King’s College to read law and afterwards was employed by the BBC to monitor news output across Europe.  It was his experience and connections there that enabled him to build his successful publishing house.

It is a debt that Lord Weidenfeld thought he would never be able to repay.  But now, seeing how many Christians are being martyred in Syria, ‘where many have a faith so ancient that they still speak Aramaic, the language of Jesus … in the place where the apostle Paul was converted on the road to Damascus,’ he has set up a fund to help pay for their escape.  It aims to rescue ‘around 10,000 souls.’

The Fund helps support the work of Christian charity Barnabas Fund, which is helping Christians escape the country and relocate in another.  ‘Put simply,’ Lord Weidenfeld writes, ‘we rely on a Christian network to deal with the logistics, while we, a Jewish network, raise money to help pay the bills.’

He remembers a great friend telling him that, ‘The Jew is the elderly brother of the Church, and finishes up by saying, ‘This Christmas it is time for us to look after our younger siblings.’  I’m praying that this great hearted man may meet the Person behind the family’s kindness – the greatest Jew of all, the Lord Jesus Christ.

No welcome in this church for the Ancient of Days

NHS giving £2million to charities to avert crisis amongst elderly this Winter.