December 26th was named ‘Boxing Day’ after the tradition of aristocrats in big houses giving their servants gifts, and the day off.  The Oxford English Dictionary, referring to Britain in the 1860s defines it as “the first weekday after Christmas day, observed as a holiday on which postmen, errand boys, and servants of various kinds expect to receive a Christmas box”.[9]

It can also be a kind of ‘thanking God Day’, a day of metaphorically taking out of your memory ‘box’  things that have blessed you in the past year.  Wrapping them up with gratefulness and thanking Him for them.   If you keep a journal you will have noted them already, and some will be more significant than others.

I’ve always thought that the best gifts don’t come wrapped up, but are the kindness we receive from others.  In fact, research shows that the most lasting and beneficial effects for us come from experiences rather than gifts.  They are often the small things.

We will all have our precious ‘small things’.  Opening my ‘box’, I’m pulling out the first Christmas ‘gift’ I received this year, which was a Fitness Training plan designed especially for me and attached to an email from a Personal Fitness Trainer.  Corey studied for his Diploma and after two years is now running a successful business with clients of all ages.   It blesses me that he remembered me and thinks I’m still capable!

Another memory wrapped with huge gratitude is of four rows of airline passengers and a cabin crew member on their knees in the aisle shining their phone flashlights on the floor beneath the seats searching for my lost mobile.  It happened on my American airlines flight to Los Angeles last month.  I’d been reading a book on Kindle and the passenger next to me thought it must have slipped off the seat and on to the floor when I put it down to pass over her dinner.  She and I got down first with her phone flashlight and the others joined us. The steward said that when we landed he would lend me his phone to call my son so he would know where to meet me (the terminals had been changed) but my son’s number was on my lost phone.  My stress score must have been 100 percent!  But it was found eventually and now I’m looking for a fluorescent phone holder! 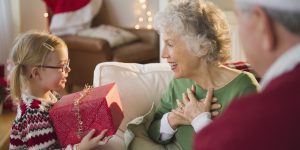 Earlier this year, Julia,  a very busy pastor for older people in her church found a quiet spot to call just to say how helpful my work has been to her in her role, and even more now that her mother has developed dementia.  I’m so grateful to her taking the time and even making notes of things she wanted to comment on.  And this morning Jane has emailed to say how  inspiring she finds my E-Sends.  Thank you, Jane!

You will have dozens of gifts of kindness like this.  You could write them down on slips of paper and put them in a box.  But the best thing is to call them to remembrance, and thank our Father for each one.

And there’s something in somebody else’ Gratitude box that blessed my socks off.  My heart fell when my son’s friend Nathan told me that he planned on leaving their church (Revival, in California), but rose again when he explained it was to take up a pastorate role in a new church in Idaho.  His friend had moved there and planted the church.  He announced its opening, and for the first service 600 people turned up; 950 for the second.  ‘He’s just preaching the Word,’ Nathan said, ‘there isn’t a worship group or anything.’  When we spoke Nathan’s house was up for sale and he and his family were just rearing to go.

Sleeping pills (Benzoadiazepines) could raise risk of Alzheimer’s in elderly.

A grateful heart is a healthier heart!