Japan gave the world the Walkman, Samsung phones and a host of hi-tech innovation. Now a small Japanese community went back to basics to beat a deadly condition for the elderly. 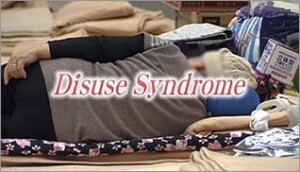 ‘Disuse syndrome’ was identified by medical professionals in the town of Minamisanriku, part of Eastern Japan that had been devastated by the 2011 earthquake.

It particularly affected older survivors.  If left untreated, Disuse Syndrome causes bodily and mental functions to shut down. It’s not as dramatic as diseases, such as Ebola, but it’s just as deadly. It can lead to dementia or rendering a sufferer bedridden.

The earthquake and tsunami swept away homes and livelihoods.  Survivors were housed in evacuation centres or in temporary housing.  Everything was efficiently done.  But there was limited opportunity, and very little incentive to move. So Disuse Syndrome began to take hold. Formerly active people complained they couldn’t walk, or get up, and had pain in their backs.

They began to say things like,  ‘I used to walk every morning and evening, but I can’t do it now’  ‘My legs are getting weak, so I can’t walk or stand up.’  Watching his father collecting fresh water, a son said, ‘I always thought he was strong. But when I saw him struggling to carry water like this, I realized he’d aged.’

Mayor Jin Sato called in Dr.Yayoi Okawa, an expert who has been helping to improve life at evacuation sites by focusing on health issues at the time of disasters. 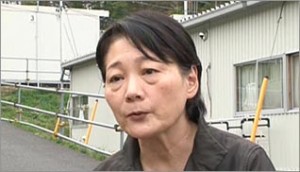 Dr Okawa said, “Every possible function of the body deteriorates in Disuse Syndrome. You have to regard it as something completely different from a normal cold or stomach disorder which you may be familiar with. ‘Lifestyle’ is the keyword.

‘The treatment method is simple. All that is required is to move your body in your daily life.’

But first, people had to be motivated. Evacuees tend to stay inside their temporary housing units, and Dr.Okawa created a supporter’ system which involved asking residents to come up with ideas for encouraging them to to come out and move their bodies.

The Mayor set to and involved his  staff and the entire community. He said, ‘Basically, we asked everyone how they could use their particular field of expertise; for example, if you like dancing, you could invite residents out to dance with you, or show them how to dance. Or if you like singing, you could invite residents to join you and enjoy singing together. We worked on ways to bring all those who are suffering from Disuse Syndrome to come out and do something with other people. 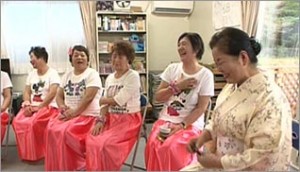 Before the disaster, Chikako Abe used to teach Japanese dance, but stopped when the tsunami washed her house away. When she heard about the Kagayaki supporter system she started teaching again. Her oldest student is 81-year-old Sachiko Sugawara.  Before the disaster, Sachiko had lived in a two-story combined house and shop. She had run a bag shop for more than 50 years and had enjoyed a very busy life. ‘Purchasing, meeting wholesalers, receiving goods, displaying them on the shelves… I managed everything by myself,’ she recalls. She’d lost her lifestyle and all her relationships.  But now she dances, is meeting people and is moving her body as much as she can.

Farm fields  were provided by Motoko Endo, a Kagayaki supporter. She said, ‘Just after the disaster, some elderly people were muttering, ‘I should have been washed away’. But now they’re gradually recovering their vitality and working earnestly saying, ‘My vegetables grew this big!’, and feeling the joy of harvesting they say, ‘I can have these for dinner!’ They also gradually communicate more with each other, asking, ‘When did you add the fertilizer?’ or ‘When did you sow them?’ They’re kind of competing with each other in terms of recovering their vigour!’ 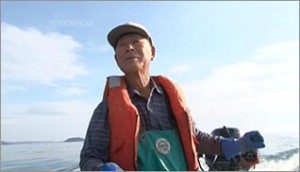 And fisherman, Yoshio Sugawara, who’d never lost his passion for the sea and fishing but had given up after the disaster, began by repairing his nets.  Six months after getting back into his boat he had fully regained his strength, and goes out to sea almost every day now.

The reporter who covered the story, Jason Hancock said, ‘Three years and eight months after the disaster, the town’s recovery is still ongoing, but many of its residents are managing to restore their health condition to what it was before the disaster.

Inactivity and apathy affect many older people, not just in Japan but here, and the Minimisannku story shows how, surrounded by a caring community, they could be helped to a good old age.

The film was originally shown on Sky TV, but the story, in words and pictures can be seen at:     http://www.nhk.or.jp/japan311/tmrw3-elder.html

Rising ageism in the crisis and how it’s being challenged