When we hear of disasters they are sometimes on a scale so large that our minds can’t grasp them.  Yet now and then you hear a small thing, something simple and so intensely human that it takes you right into the centre of it. 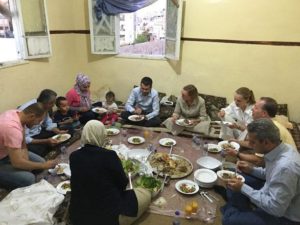 That’s how it was listening to a radio programme about food and Syrian refugees on one of the Greek islands.  The women talked about the meals they used to make at home; who they’d cooked for and the ingredients they’d used.  Now they tried to cook meals that they were used to before their homes were bombed out of existence, and the whole community came together to make it possible.  Some enterprising refugees had set up projects with Greek farms and brought fresh vegetables into the camp.

When they arrive refugees first live in tents, and later move into converted containers.  One man had opened up a wall in his container and turned it into a café; a gathering place where they shared familiar meals.

Hearing these men and women talk about something that is so every-day in my own life made them real to me. They moved from a two-dimensional story into the real world, in which I also live.

It made me realise, too, how important food is for our psychological, as well as our physical well-being, and the part it plays in our social lives.  I’ve just written an article for our Pilgrims’ Magazine, describing how churches are reaching lonely older people in their communities.  Food is often at the centre of the activities they offer; if not at the centre it’s on the side, on the countertop with the familiar tea and biscuit.   A cafe in a church in Manchester has been revitalised by a retired doctor who happens to be a super cook, and is drawing in people who are not interested in church, though some have become interested come to find out more…

In Yorkshire, our retired living complex has a rather good dining room and the manager, Vicky, decided to open a Friendship Café.  She said, ‘The idea is for people to come and have a cuppa and a chat, and whilst here should they have any problems we can signpost them to someone who may be able to help. Residents have been invited to come and have a cuppa and chat too, to encourage one another and to be there to talk to new people coming into the building.’    (This story is also in the Pilgrims’ Magazine.) 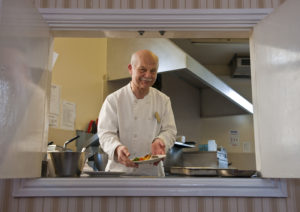 And in our care homes, residents’ food preferences are the basis of the menus.  Emmaus House in Harrogate has a super chef who could probably be earning a fortune somewhere else!

Without a doubt, food is more than food – it’s a love language.

Dementia, and Carols at Christmas