At the Hay Festival a few weeks ago, the main scriptwriter for the BBC’s ’Archers’ programme said its older characters were ‘national treasurers.’  He said that they provided a sense of history and continuity. ‘History’ is shorthand for having lots of stories to tell, which of course, older people do..   After all, they’ve lived long enough to accumulate a few!  When school children come into our care homes to interview the residents – usually at a war commemoration or Royal occasion, they are fascinated with the things they hear from them.

And now the National Trust also says that its older volunteers are national treasures, and that they are missing them, badly.  ‘At last! Someone has noticed the huge debt we owe Britain’s unsung army of pensioner volunteers – though only because they’ve gone missing. The National Trust have just announced that it is proving impossible to recruit volunteers for its stately homes,’ writes Ester Rantzen, in the Telegraph.[i]

The Trust is only one of many charities finding that their older volunteers have gone missing.  A report some months ago said that 70% of charity workers were older people, so the gap they are leaving must be quite significant.

It’s not altogether unexpected, says Ms Rantzen, who has experience of setting up charities, with ‘ChildLine’ and ‘Silverline.’  She writes, ‘The virtues they offer – reliability, good-heartedness and dedication – have been underestimated. No wonder they’ve upped and gone.’

And where are they going?  Spending their children’s inheritance, some of them.  Seeing how their savings are bringing in little return they’ve decided to take their adventure holidays before infirmity catches up on them.

Others are caught up with caring for their grandchildren, or perhaps their spouses, if they have developed dementia, for instance. And some are just plain busy leading social lives that leave little time for charity work. A letter in the press a couple of years ago from a son bemoaned the fact that there simply wasn’t time for him to see his elderly mother because her diary was too full of social events.

But there are some still doing excellent charitable work.  Ms Rantzen mentions a 97 year old ‘Silver Line Friend’ who regularly telephones a 90 year old to chat.  What an excellent work that is! 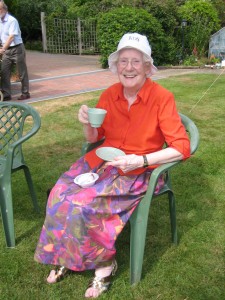 And we (Pilgrims’ Friend Society) would be lost without our volunteers, most of whom are older folk themselves.  They help arrange events for our homes; befriend our residents, accompany them to hospital appointments, visit them in hospital and raise funds for our work.  As far as we’re concerned, they are more than ‘national treasures’, they are eternal treasures.  Their work is noted in Heaven – see Matthew 25:40.  Not to say that others’ aren’t! But I’m looking at what I see around me.  They’re usually quiet and self-effacing, but I can’t resist putting a few photographs up here. 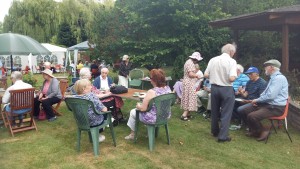 God bless older volunteers!  And let’s learn to appreciate them, and value them more.

Meaning in life – right to the end

A dying, elderly lady blesses the lives of thousands

Your ‘good works’ come to you right to the end …