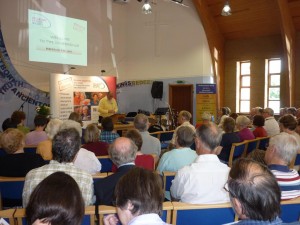 At a seminar I took at the word Alive event earlier this year I asked how many people in the audience were impacted by dementia, either as patients or as family members.  About two thirds raised their hands.  How many were receiving social care or support, I asked.  Not a single hand went up, and their faces spoke volumes.  We usually ask the same question at regional conferences, but participants in February had come from all over the country.   In some, mainly rural or semi-rural areas there can be support, but it is the exception rather than the norm.  And last year the Royal College of General Practitioners published findings of a national survey showing that 70% of GPs  reported no support for patients diagnosed with dementia.

Now, at a meeting of the British Medical Association this month doctors declared that diagnosing dementia without support is “pointless”.  Dr Gary Wannan, chairman of the BMA’s community care committee, and a psychiatrist said: “As a doctor you feel very responsible in giving a diagnosis, and you want to make sure in giving anyone a diagnosis, it’s going to be to their benefit. There’s no point in giving someone a label, but then not being able to provide support.”http://www.telegraph.co.uk/news/2016/06/22/pointless-to-diagnose-dementia-if-no-help-is-on-offer/?

Dr Richard Vautrey, deputy chairman of the BMA GP committee, accused the Government of “a focus on counting numbers and hitting targets” instead of tackling gaps in services, which meant little help was available after diagnosis was made.  Too many patients were being left in a state of limbo after being told they might have dementia, with long waits to see a specialist and little support from social services.  The doctors clarified that this did not mean that patients should not receive a diagnosis, but that medics should fight for services to be put in place so help was given.

Jeremy Hughes, CE of the Alzheimer’s Society admits that there ‘is still a desperate lack of support for people with dementia,’ but the BMA’s motion will only make it worse by ‘masking the need.’

What does he mean – ‘masking the need?’  Who doesn’t see the current need?  The BMA is clear about it, and the families coping with dementia face it daily.  Surely Mr Hughes can’t be saying that even though there is no support and no cure,  individuals should still be labelled simply in order to increase the numbers?   To be sacrificial lambs in an anonymous crowd so that there is a bigger stick to hit the government with?  His statement completely ignores the fact that being labelled with dementia can have a devastating effect on the person concerned.  Dementia is a terminal, progressive illness – how to cope with that when there is no support?

Perhaps my comments are a bit harsh, but my heart goes out to people who are struggling to cope.  Like the couple in their late 80s that I met at Malmesbury. Both were desperate for respite care so that the wife, the caregiver, could have a night’s uninterrupted sleep.   Or the couple at Bury St. Edmunds where, several times a night, every night,  the mother demanded they come and visit her.

Yet, like the old Soviet Union rhetoric, the narrative continues.  Professor Alistair Burns, NHS England’s National Clinical Director for Dementia, said: “Awareness of dementia is at its highest and we believe that timely diagnosis of dementia allows people to access the emotional, practical and financial support that brings.’  Perhaps Professor Burns could come with me and my colleagues to our next seminar and tell our audience how to do just that.  (Last November David Cameron said that Local Authorities would be legally obliged to provide emotional and psychological support for dementia caregivers, but it hasn’t materalised.)

Jeremy Hughes also accused GPs of being ‘paternalistic’ and overlooking the fact that individuals wanted to make their own decisions.  Perhaps he should take a leaf out of his own book.  Individuals don’t want to be a statistic, either, or used for political ends.

Our GPs are doing their best for their patients.  They care about what happens to them after diagnosis.  They don’t want them to be part a statistic that may, or may not influence the government.  Perhaps we should email our Members of Parliament and suggest they put pressure on the Health Minister to provide the support that’s needed.

Never under estimate the power of the mind