Shakespeare’s Sonnett (116) was printed in the Royal’s wedding Service this week and published in one of the newspapers.  It should be dedicated to people caring for loved ones with dementia.  It reads:

“Not to the marriage of true minds admit impediments.

Love is not love which alters when alteration finds,

Or with the remover to remove:

O no, it is an ever-fixed mark

That looks on tempests, and is never shaken:

It is the star to every wandering bark,

Whose worth’s unknown, although his height be taken.

Love’s not Time’s fool, though rosy lips and cheeks

Within his bending sickle’s compass come;

Love alters not with his brief hours and weeks,

But bears it out even to the edge of doom.

If this be error and upon me proved,

I never write, nor no man ever loved.”

There can be many devastating ‘alterations’ in a person with dementia. Changes in the brain can affect the person’s understanding and reactions.  ‘He’s always been so appreciative,’ said a wife, ‘but now he’s becoming sharp and unkind.’   Worse, a husband was devastated when, as he got into bed, his wife of 40 years  challenged him, ‘Who are you?’

There is so much of this ‘unalterable love’ among dementia caregivers. Lynne has dementia and is living in one of our care homes, and every day during the lock-down her husband, Duncan, walked 5 ½ kilometres to the home to throw a kiss over the wall to her window.  When visiting at a distance through a window was introduced, he was there at every opportunity.  Other husbands have spent most of each day in a care home with their wives.

Sue described her and her husband as soulmates, and had to ‘fight’ through various specialisms for 8 years for a diagnosis when he developed a particularly difficult kind of dementia.  When she brought him to our home in Evington he was very poorly and given only three months to live, but he lived for another five years, even taking up his artwork again.  Though there were times when he seemed to shut her out of his life, her love for him and a constant pursuing of his wellbeing never altered. 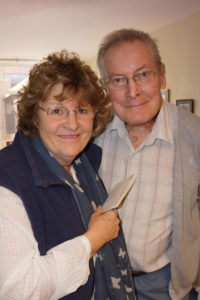 The old hymn goes, ‘Holy, Holy, Holy! all the saints adore Thee, Casting down their golden crowns around the glassy sea.’  Surely, among dementia caregivers’ crowns is their ‘unalterable love’.

Arguments can help put off dementia