A friend told me about the Vicar, who during a visit to a parishioner, asked if she had thought about the ‘here-after.’  Yes, she said, every time she got to the top of the stairs she asked herself what she had come here after.

After the age of 50, if you forget things you worry that it might be the start of dementia.  We forget things all our lives but it isn’t until we get into the ‘D’ zone that we begin to worry.   The important thing to note is the sort of ‘forgetting’ we experience.  If you forget where you put your car keys, join the multi-million user club who do it frequently!  But if you are holding the keys in your hand and can’t remember what they are for, that’s a flag for concern.

A newly published study* shows there has been a doubling in the incidence of cognitive decline between 2009 and 2018.  Cognitive decline is not just about a worsening memory, although that in itself takes worriers, (usually the ‘worried well’), to the memory clinic.  Cognitive decline also involves not being able to keep your plates spinning – to reason and work things through.  A researcher found that the ability to answer a question that recalls three different facts could be an  indicator of failing executive function.  For example, ‘what was the name of the place you lived until the age of 11; the place where you were married and the title of your first job.’

If the study is repeated and published in say, 2023, the figures would probably be even higher, because of the stress caused by the Covid pandemic that saw millions of older people isolated in order to ‘shield’ them.  Isolation is used as a form of punishment and even torture in some regimes and its effects are always injurious.  There are now reports of increased mental ill health and inevitably some cognition will be affected.

The good news is that decline in cognitive function can be reversed.  A study by the Mayo Clinic found that in 70 percent of non-clinical cases it returned to normal.

The things that help are exercise (increases blood flow to the brain and grows capilliary networks); spending time with people, especially God’s people,  (nothing stimulates our neuronal circuitry more than interacting with others), reading (engages most of the brain), laughter, and worshipping with others.  Secular research misses out the last item, but studies show that attending a church reduces stress and extends lives.  The founder of the Christian World Revival intitute, Selwyn Hughes wrote that when we enter into worship we experience the wholeness of God, and in His wholeness we ourselves are put together again. 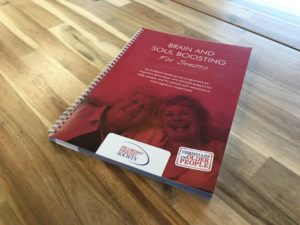 Finally we are getting excellent reports from people using our series of Brain & Soul Boosting for Seniors.  Built on cognitive behavioural principles and Scriptural insights, this boosts not only cognitive function but spiritual health.  See https://www.pilgrimsfriend.org.uk/resources/brain-soul-boosting-for-seniors.