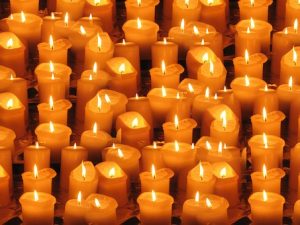 ‘How are older people empowered by your church?’  we asked people taking part in our survey at New Wine, a few weeks ago.  Around 22,000 adults came to New Wine so we weren’t short of participants!  (And if any of you are reading this blog – a BIG THANK YOU!)

Older people can be like candles, lighting up the congregation – if they themselves have been lit by encouragement from others.

Are your seniors encouraged to do things for others, or are they seen as a recipient group, needing support themselves?  In other words, are they servants, or needing to be served?

‘Do you feel that your church’s seniors are fully engaged in church activities?’ Answers varied from, ‘No, we could think harder about this,’ to ‘Probably not’, to ‘Mostly, but some just come for the companionship, tea and cakes,’ to ‘Yes, very engaged and active’ from a church were some seniors are elders and leaders.  Here’s my favourite:

‘[They are] involved in welcoming/hospitality/small prayer groups.  They encourage and support younger people, giving guidance, including financial advice.  They reach out to others, sharing the wisdom and gifts and insights from the Lord and His Word.’  (My italics.)

Another said,  ‘[Older people are] at our heart.  All roles within church including pastoral, prayer meeing, except physical lifting.’   Which is absolutely lovely: a reflection of the biblical Levites (Numbers 8:25)!

Some participants said that they would like more younger members, as they now have more older than younger, but rather than neglecting their seniors in a push for the younger,  they were being involved in their outreach.  It wasn’t a case of seniors having to ‘move out of their comfort zone to accommodate the young’, as one pastor is reported as saying, but seniors encouraged to be involved, having a heart for the work.  Most older people would love to see more young folk in their churches.  They would also love to be able to help them more – to give financial and other advice, and to listen and pray.

God always intended that His seniors take their place in His church, and in His world. The broadcaster Debbie Thrower, whose work as a lay chaplain for older people in Win­­chester diocese led to the setting up of the Anna Chaplaincy network sees great opportunities for the Church. “Old age can be an intensely spiritual period of life: I saw my own parents grow spiritu­ally, and I felt that we don’t make the most of this period.” [i] 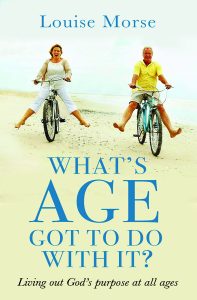 Often older people are held back because they have a poor view of themselves.  They have been ‘infected’ by  secular ageism which says old age is when people are past it.  Which is totally untrue, of course.  God designed old age on purpose.   Have a look at the special attributes that seniors have, and how to make the most of them, in What’s Age Got To Do With It?   Only 17 days to go to its release!

How we cope with fear